Men, I’ve got a great one lined up for you today with a man who I was just recently introduced to. In the last several weeks, his business has been forcefully shut down, he and his business partner have been arrested, and they’re now facing a $15,000/day fine for operating their legitimate and licensed gym in New Jersey.

Look, I’m not asking you to agree with the premise of Ian Smith’s current situation and the fight he’s been thrust into (although I think many of you will) but I would have you consider the validity of the fight he’s engaged in, what it means to be a man of conviction, standing up to the government, and putting it all on the line for something you believe in.

“You can’t stay shut down forever. The world doesn’t work like that. There’s not a pause button on the global economy.” Tweet That— Ian Smith 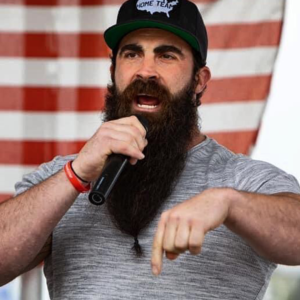 As I mentioned earlier, my guest today is Ian Smith. He is the co-owner and founder of Atilis Gym in New Jersey.

He’s recently been thrust into the national limelight and has been featured on Tucker Carlson, CNN’s Chris Cuomo, and Charlie Kirk for defying local business restrictions and refusing to close his gym.

This isn’t a man who set out to defy the government, piss people off, or be reckless with people’s health and lives but he is a man who is willing to stand by what he believes in the face of threats of imprisonment and astronomical fines for what he believes to be unconstitutional infringements.

Gent’s, you’re really going to enjoy this one and I, personally, was extremely impressed with Ian’s knowledge, his thoughtfulness, and, most importantly, his willingness to take a strong stand for what he believes in.

“We’re not bad guys. We just want to work.” Tweet That— Ian Smith

“If you like the life you live, sometimes you got to stand up to defend it.” Tweet That— Ian Smith

As you’re likely well aware by now, we just released our free Battle Ready course designed to walk you through 4 crucial planning stages so that you can accomplish more over the next 90-days than you have at any other point in your life.

If you’re sick of living a life of default and mediocrity, I’m going to show you over a period of 30 days exactly how you can take control of your life once and for all and learn the systems to be able to predictably replicate results over and over and over again.

Whether you’re trying to salvage your marriage, connect with your kids, lose weight, get strong, secure a promotion, start a new business, or simply develop more discipline and consistency in your life, I’ll help you take all of the guesswork out of the equation and show you exactly what you need to do to produce results.