Being a man is hard work. We all have so many roles and responsibilities (husband, father, business owner, community leader, and the list goes on and on). In addition to that the media, and the world are trying to tell you how you should behave and what it means to be a man by giving us a list like “27 Ways to be a Modern Man.”

My guest today, Mr. Jack Donovan, has narrowed it down to 4 tactical virtues all men should strive to improve, the difference between masculinity and morality, and why we should care.

“Masculinity is like intelligence. You can be really smart but it requires some development.” Tweet That— Jack Donovan 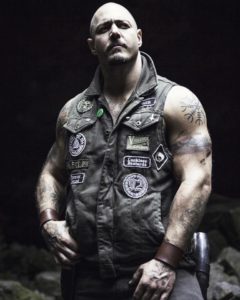 Men, I’m excited to be introducing you to someone who I’ve been following for some time now, Mr. Jack Donovan.

Jack Donovan is the author of The Way of Men which has become a runaway cult hit with men all over the world.

He’s been blogging, writing and speaking about masculinity and tribalism since 2007. He is currently building a tribe in the Pacific Northwest, where he also owns a tattoo shop attached to a powerlifting gym.

He is a frequent guest on a wide variety of podcasts, and an occasional contributor to the online magazine RADIX. He also runs his own podcast, Start The World where he interviews self-defense experts, survivalists, authors and artists.

“Anything you can do to build virtues and skills is making you a more useful man.” Tweet That— Jack Donovan

“Want to be more manly? Surround yourself with men who are better than you at things.” Tweet That— Jack Donovan

“If you look at a man who is strong and a man who is weak, you’d rather have the strong man on your team.” Tweet That— Jack Donovan

One Man’s Story: Introducing Kids to the Outdoors
Next Post: Finding Your Tribe (Video)