Needless to say, there has been a tremendous amount of turmoil and division in America over the past several years. This isn’t new in the history of the United States but it seems to me that we, as citizens, are more divided than we’ve ever been on a myriad of issues from foreign policy, to COVID restrictions and mandates, to gun legislation and healthcare, and everywhere in between.

And, my guest today has a lot to say about these issues and more. And, not ironically, I’m sure people will be very divided on this conversation as well. His name is Representative Dan Crenshaw, a former Navy SEAL and Representative for the state of Texas. Today, we discuss the new COVID measures announced by President Biden last week, foreign affairs and the threat of terrorism (including everything happening in Afghanistan right now), why our emotional responses to these issues are getting us into trouble and putting us in danger, and why we all need to be more informed rather than ignorant on the most pressing issues of today. 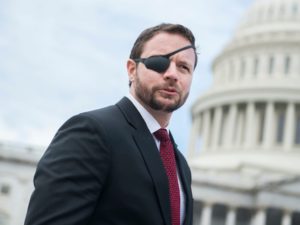 My guest today is Representative Dan Crenshaw. He is a former Navy SEAL with 10 years of service in the teams and is currently a House Representative for the state of TX.

Dan is also the author of Fortitude: American Resilience in the Era of Outrage. And, he has become a very visible and outspoken spokesman on some of the most pressing issues facing America today. If you’re not already doing so, I’d highly suggest following him on social media because he does a good job breaking down policy and politics in video segments to inform the country.

Gentlemen, this is a great conversation and what Dan advocates for – reasonable, informed dialogue – is something that is much needed in society.

“People have known nothing but peace for the last 20 years.” Tweet That— Dan Crenshaw

“If you’re going to have a strong opinion, make sure you can really defend it without resorting to silly slogans and name calling.” Tweet That— Dan Crenshaw

If you’re anything like me, you have a tendency of letting other people’s words and actions become personal. But it doesn’t serve you well because, when you take things personally, you tend to overreact or react incorrectly to the environment around you.

This is a concept taken from the book, The Four Agreements by Don Miguel Ruiz and it just so happens to be the Book of the Month inside the Iron Council to coincide with our monthly topic of Creating Your New Reality.

And, one of the best things about the Iron Council is that we all have the opportunity to be challenged in our thoughts, words, and actions. Most of society wouldn’t consider that a benefit but, in the Iron Council, we do because challenge is the only path to progression and ultimate success.

If you want to learn more about what we’re up to and how the almost 1,000 members are challenging each other to become better men, head to www.orderofman.com/ironcouncil.

Rebuild and Remake Yourself
Next Post: Predator or Prey?