Extreme violence is something not all of us are likely to face, and that’s a good thing. But that doesn’t mean it can’t happen at the drop of a hat. And, in that moment, it is significantly better to be prepared and aware of what could happen than to be ignorant to it completely.

And, that is where my guest today, Doug Marcaida, comes in. He is a martial artist, edge-weapons specialist, and knife designer. And, he is one of the judges on the extremely popular History Channel show, Forged in Fire.

Today we talk about creating a home as a safe environment for your family, the culture of violence, martial arts and their efficacy, curbing the beast inside of us all, the concept of “verbal judo,” and ultimately how to temper violence though skill and familiarity.

“Complexity is nothing more than simplicity well executed.” Tweet That— Doug Marcaida 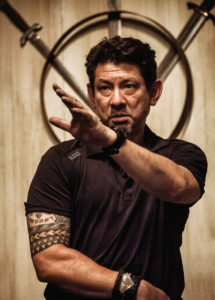 As I mentioned previously, my guest today is Doug Marcaida. Doug is a martial artist, edge-weapon specialist, and knife designer.

Originally from the Philippines, Doug moved to the states when he was 8, served 8 years in the US Air Force as a respiratory specialist, and has since spent decades travelling all over the world teaching first responders and military personnel the foundations of martial arts and knife fighting.

You might know him as a judge on History Channel’s Forged in Fire and his signature phrase, “It will keal!” But I think this conversation is really going to open your eyes to who Doug is, his immense appreciation for martial arts, and how it can serve you. Enjoy.

“Martial arts should make you a better person, not a bitter person.” Tweet That— Doug Marcaida

“Man by nature is violent, it is our nature.” Tweet That— Doug Marcaida

Gents, we’ve spent time during this conversation talking about readiness for violence – to both defend against it and administer it if necessary.

But there is another battle taking place you need to be aware of and, more importantly, be ready for. That’s the battle for your own level of excellence. I think most of us know we’re operating at a capacity less than we’re capable of and I want you to have all the tools and resources you need to be ready for what life has to throw at you and tee yourself for a powerful 4th quarter as we roll into 2022.

That’s why we’ve put together a free email course called 30 Days to Battle Ready. When you sign up, you’ll unlock access to the exact strategies I’ve developed over 10 years and have now been tested for maximum results with thousands of men. If you’re ready to take your life to the next level, get signed up immediately and don’t waste another day. You can do that at www.orderofman.com/battleready.

PETE ROBERTS | The Pursuit
Next Post: Lead in the Absence of Leadership | FRIDAY FIELD NOTES