A man who knows his way around the grill is a man that can earn the respect of his buddies and the affection of the ladies. Now, whether it’s true or not, grilling and/or BBQing, is viewed as a staple in every guy’s toolbox of manly skills.

Whether you’re an amateur, a novice, or an expert, my guest today teaches us how to up our BBQ game.

“I’m kind of a year-round guy when it comes to grilling. It’s an occupational hazard.” Tweet That— Scott Thomas 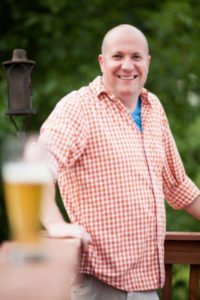 Today I introduce Scott Thomas with Grillin Fools. I was introduced to him through a mutual friend and I’m stoked to have him on the podcast just before us guys fire up the grill for the 4th of July!

Scott Thomas, the Original Grillin’ Fool, was sent off to college 22 years ago with a suitcase and a grill where he overcooked, undercooked and burned every piece of meat he could find. After thousands of failures, and quite a few successes, nearly two decades later he started a website to show step by step, picture by picture, foolproof instructions on how to make great things out of doors so that others don’t have to repeat the mistakes he’s made on the grill.

Continually challenging the traditional “rules” and “standards” of BBQ, Scott will grill anything from lettuce and leeks to brisket and bread.  He has written feature articles for both St. Louis and Feast Magazines, been quoted in the Wall Street Journal and appeared on countless television and radio spots in his hometown of St. Louis. He is recognized nationally as one of the Char-Broil All-Star Bloggers and writes for Sears at GrillingIsHappiness.com.

Scott is a husband and father of three, residing in St. Louis home of the rib of the same name and the birthplace of the pork steak.

“People will tell you to keep it short and sweet. Screw that! I’m going to show people EXACTLY how to do it.” Tweet That— Scott Thomas

“The whole point of BBQ is to take tough cuts of meat, cook them slow, and make them into tender cuts.” Tweet That— Scott Thomas

“To make a good rub, you need to balance sweet and savory, spicy and not-spicy.” Tweet That— Scott Thomas

OoM 014: Creating a R.I.C.H. Experience with Armando Cruz
Next Post: The Definitive Guide to the Bug Out Bag (Video)