It seems like growing a beard has become the ultimate sign of manliness. Whether you have a beard or not, chances are that you respect a man who can grow a killer man-mane.

If you’ve ever tried to grow a beard or have a desire to start, Eric Bandholz with Beardbrand is going to share with us what a beard says about the men who wear them, why beards are becoming more acceptable, and how you can grow a great beard of your own.

“A man strokes his beard on average 720 times a day.” Tweet That— Eric Bandholz 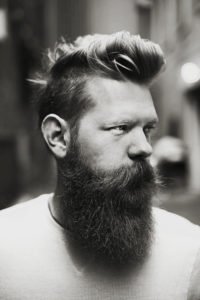 Eric Bandholz is a man who takes beard maintenance very seriously. And that’s not just because of his own impressive man-mane. As a leading grooming expert, entrepreneur, husband, father, designer and urban beardsman, Eric is also the founder of Beardbrand, a premium grooming company of beard oils, mustache waxes, kits, washes and its sister site, the community magazine Urban Beardsman.

His vision is fostering a community for the bearded lifestyle that gives men the tools to wear a beard in any environment. Since launching an e-commerce site in January of 2013, Beardbrand has grown from zero to over $120k per month built primarily on branding. Eric has appeared on national television show Shark Tank, been viewed nearly 4 million times on YouTube, and featured in Wall Street Journal, NY Times, Details, Business Insider, Fast Company and Forbes.

An entrepreneurial individual with 10 years experience in marketing, sales, and design, Eric has a keen ability to build strong, lasting business relationships that result in fruitful partnerships and to swim against the current, see the world differently, and stand out in the crowd.

“The beard tells an important story for a lot of people and it means a lot of different things.” Tweet That— Eric Bandholz

“There are always these pressures in society that may or may not accurately reflect the majority of people.” Tweet That— Eric Bandholz

“An Urban Beardsman is in an urban environement, they have professional jobs and they care about their style.” Tweet That— Eric Bandholz

How a Man Can Grow a Beard

“The majority of people who wear beards are loving, caring members of the community, society, and their families.” Tweet That— Eric Bandholz

Connect with Eric Bandholz and Beardbrand

The True Meaning of Memorial Day
Next Post: Transform Our Culture of Negativity