Fear is something every single one of us deals with (probably on a daily basis). Unfortunately, too many men consciously or unconsciously allow fear to keep them from going after what they want most. So, how can you use fear to your advantage as opposed to a hindrance?

That’s exactly what I talk about today with my guest Akshay Nanavati, the author of Fearvana: How to Turn Fear into Health, Wealth, and Happiness. We cover the critical importance of becoming aware and accepting fear, flawed mental health, the idea that there are no “bad” or “negative” emotions, why you need to learn to explore the edges of life, and how to make fear your ally.

“Experiencing the edges of the human condition reveals the essence of the human spirit.” Tweet That— Akshay Nanavati 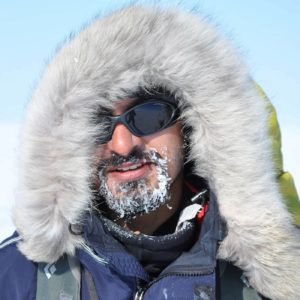 My guest today is a fascinating man. His name is Akshay Nanavati and he is a Marine veteran, speaker, entrepreneur, ultra-runner, and author of the book, Fearvana.

He’s overcome so much including a drug addiction after his service, a blood disorder that doctors told him could kill him in boot camp, and combat where his job was to walk in front of vehicles to find IED’s.

He’s dealt with PTSD, survivor’s guilt, alcoholism, and depression, and, after all of that, has somehow found the power to overcome all of it and live a life of fulfillment and adventure as a skydiver, mountain biker, scuba diver, and rock/ice climber. Men, you’re definitely going to enjoy this conversation and use what Akshay teaches as fuel to light your own fire.

“We live in a society where it’s alluring to be the victim.” Tweet That— Akshay Nanavati

“You can’t understand the light unless you’ve been in the dark.” Tweet That— Akshay Nanavati

Men, the Iron Council continues to grow as more and more men are seeing the power of what we’re doing by banding with other men who are willing to hold each other accountable to accomplishing the most out of their lives.

We just had Jack Donovan join us for one of our exclusive Iron Council sessions and we’re in the process of bringing on more incredible men to join us for our weekly calls.

In addition to that, we’re going to give you the framework and network to transform your life from what you’ve always wanted to what you’re actually experiencing. And, that is our whole objective – to bridge the gap between what you know you should be doing and what you’re actually doing.

3 Daily Practices Every Man Should Incorporate
Next Post: MAT BEST | Forging Your Own Path