One of my favorite podcast guests and friends is back on the podcast today. His name is Jack Carr, former Navy SEAL and the author of the James Reece series with his latest book just released called The Devil’s Hand.

Today, Jack and I talk about the differences between a calling and a career, dealing with discouragement from others, the conditioning that takes place in society and how to overcome it, Joseph Campbell’s, The Hero’s Journey, and how to utilize it in your own life.

“A feel like a calling to service is different. You don’t wake up at age five with a calling to fix computers.” Tweet That— Jack Carr 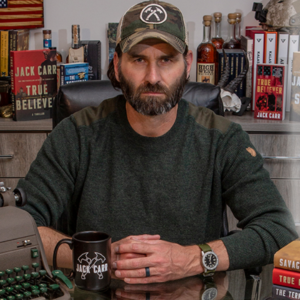 As I mentioned previously, my guest today is the one and only Jack Carr. I met Jack years ago when we had a podcast during the release of his first book after retiring as a Navy SEAL.

I could tell you a bunch about his books and how successful he is but what you may not know is he’s one of the most genuine men you’ll meet. He invited me into his home, introduced me to his beautiful family, and broke bread with me like we were old friends.

And, since then, we have become friends and it’s been incredible to see him become so successful as an author with one of his books being filmed right now with Chris Pratt playing the role of James Reece (which we talk a bit about in this podcast).

“I always try to pass on to my kids that it’s never too late to make someone’s day.” Tweet That— Jack Carr

“I look at social media and all these platforms as an opportunity to engage and say thank you.” Tweet That— Jack Carr

Preparing for a Destruction

It’s no surprise to you that the last 12 months or so have been…eventful, to say the least. That’s why with as many variables that we, as men, are likely to face, it’s crucial that we be prepared for whatever may come.

After all, David Gilmore said, “The real man gains renown by standing between his family and destruction absorbing the blows of fate with equanimity.”

And, that’s exactly what we’re talking about in the Iron Council this month. We’re learning, discussing, and challenging each other to become more prepared for emergencies, natural disasters, violent encounters, and anything else we may potentially run against.

If you want to learn more about being prepared and banding with men who will teach you and hold you accountable for doing so, join us in our exclusive brotherhood, the Iron Council by going to www.orderofman.com/ironcouncil.

Want maximum health, wealth, relationships, and abundance in your life? Sign up for our free course, 30 Days to Battle Ready