Men, I wanted to do something special today as next Monday is Memorial day and, after serving time in the military myself, I know how crucial it is that we remember our fallen warriors and honor the ultimate sacrifice they made to protect and preserve our way of life.

So, I invited my friend and the youngest living Medal of Honor Recipient, Kyle Carpenter, back on the podcast to talk about his military service, transitioning from the military, and ultimately living a life worthy of the sacrifices of so many. If you don’t know Kyle’s story, he was as close to death as one person could be after jumping on a live grenade in Afghanistan to save his fellow Marines.

All I ask is that you have a listen and stop sometime this week to think about how you are living your life and the millions of men and women who have died so that you can.

“I think it’s a duty for people to strive to remember…to look up those history lessons…to think about how and why we are the way we are as a nation.” Tweet That— Kyle Carpenter 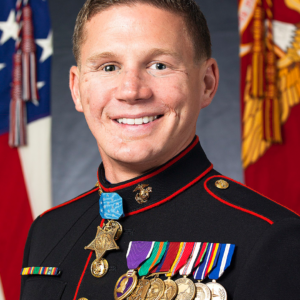 The man I have on the podcast today is a special human being. Not only is he one of the bravest individuals I’ve ever met, he’s also one of the kindest. His name is Kyle Carpenter and he is the youngest living Medal of Honor Recipient.

I was fortunate enough to have him to my home in Maine where we podcasted and spent a couple of days together. He wouldn’t admit this himself but he’s a national treasure and actual hero, and to watch him play with my children, feed our ducks and chickens, and spend hours talking and enjoying life with us all was such an incredible blessing.

As I did in our first podcast together, I want to read you his Medal of Honor Citation:

For conspicuous gallantry and intrepidity at the risk of his life above and beyond the call of duty while serving as an Automatic Rifleman with Company F, 2nd Battalion, 9th Marines, Regimental Combat Team 1, 1st Marine Division (Forward), I Marine Expeditionary Force (Forward), in Helmand Province, Afghanistan, in support of Operation Enduring Freedom on 21 November 2010. Lance Corporal Carpenter was a member of a platoon-sized coalition force, comprised of two reinforced Marine rifle squads partnered with an Afghan National Army squad. The platoon had established Patrol Base Dakota two days earlier in a small village in the Marjah District in order to disrupt enemy activity and provide security for the local Afghan population. Lance Corporal Carpenter and a fellow Marine were manning a rooftop security position on the perimeter of Patrol Base Dakota when the enemy initiated a daylight attack with hand grenades, one of which landed inside their sandbagged position. Without hesitation and with complete disregard for his own safety, Lance Corporal Carpenter moved toward the grenade in an attempt to shield his fellow Marine from the deadly blast. When the grenade detonated, his body absorbed the brunt of the blast, severely wounding him, but saving the life of his fellow Marine. By his undaunted courage, bold fighting spirit, and unwavering devotion to duty in the face of almost certain death, Lance Corporal Carpenter reflected great credit upon himself and upheld the highest traditions of the Marine Corps and the United States Naval Service.

“We all have our own paths. We can’t expect those who haven’t served to know what it’s like to serve and truly understand what the uniform represents.” Tweet That— Kyle Carpenter

“Ultimately, we all raised our hand and entered into a life of service which is also a life of the unknown.” Tweet That— Kyle Carpenter

Men, I’m happy to announce that our events are back on and, kicking things off, is our Legacy Experience for fathers and their sons between the ages of 8-15.

On September, 23rd-26th, we’re going to be hosting 20 fathers with their boys on my property here in Maine. We’re going to challenge each of you and equip you with the tools you need to create deep and meaningful bonds with your sons and, of course, help usher them into manhood.

We’re also going to be presenting you with physical, mental, and emotional challenges all designed to forge the kind of men you want your boys to become and the kind of men society needs.

We have 11 spots already filled and the remaining 9 are going to go quick so, if you’re interested, register now.

You can watch a short video that outlines our experience and get your spot locked in at www.orderofman.com/legacy.

How to Create an Inspiring and Profitable Men’s Movement
Next Post: If You’re Going Through Hell…