Politics – just the mention of the word infuriates most and has the ability to split up marriages and lifelong friendships alike. What a shame, since our political environment literally permeates every single element of our lives – taxes, defense, infrastructure, education, economics, and so much more.

Today, I am joined by my good friend and mentor Sean Whalen. Sean is currently running for congress in the third congressional district in Utah. You’re going to love some of what this man has to say and, I’m sure a lot of you are going to hate what he has to say.

But, regardless, I encourage you to listen with an open mind so we can prove to the world that it is possible to hold a civil and intelligent political conversation.

“My mantra is ‘why not.’ Why can’t I go do anything and everything I want?” Tweet That— Sean Whalen 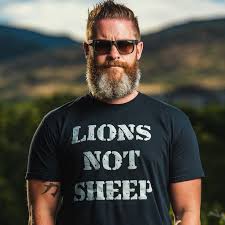 Gentlemen, today I get to introduce you to one of my favorite repeat guests, Mr. Sean Whalen.

Sean is a friend and mentor of mine and, although I don’t agree with him on everything, I have always admitted his candor and ability to hold true to his convictions.

He has done everything from MMA fighting to real estate mogul to offroad truck driver. He’s talked about it all from hitting rock bottom through a bankruptcy and nasty divorce to what has become an incredible movement with Lions Not Sheep.

And, if that’s not enough, he’s adding Congressional Candidate to the never-ending resume that can only be Sean Whalen’s.

Gentlemen, buckle up, listen up, and let’s talk about men and politics.

“The [political] machine is broken.” Tweet That— Sean Whalen

“The game of politics was never meant to be a career.” Tweet That— Sean Whalen

Men, let me take a quick minute to tell you about our exclusive brotherhood, the Iron Council.

I thought today, I’d share with you why I call it an exclusive brotherhood.

Exclusive, because this is not available to everyone. Over the past two years, I’ve seen tens-of-thousands of men come and go inside the Order of Man but, I’m always blown away with the roughly 1% of men inside this council and the caliber of men you’ll find here.

I say “brotherhood” because these men are working along side each other, should to shoulder in helping each other accomplish big things from job promotions, to marriages, to the challenges that comes with raising children, and getting in shape. We are forging bonds that are hard to explain and not easy to understand, especially in this digital age we live in.

So, if you want to join this exclusive brotherhood, or at least find out what we’re all about, I encourage you to head to www.orderofman.com/ironcouncil to learn more.

“If you really want to create a revolution, you can’t do it the way everyone else has done it.” Tweet That— Sean Whalen