Gentlemen, I cannot tell you how stoked I am to have my guest on today, Mr. Michael Chandler. If you’re not already familiar with who he is, Chandler is a three-time Bellator MMA Champion who only recently made his debut in the UFC after long-time speculation of him making the switch to UFC.

On top of all of that, Michael is a devoted family man and we spent about half of our conversation talking about what it means for him to be a husband and father. We also cover overcoming a very public loss, why every man ought to bet on himself, three traps to avoid when on the losing side of the equation, Chandler’s upcoming fight in November, and the conflicting aspirations of being a family man and fighter.

“Communication is paramount when you talk about having a healthy relationship.” Tweet That— Michael Chandler 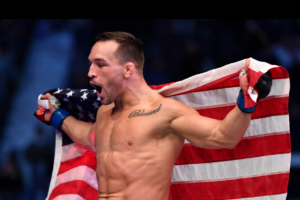 My guest today is the one and only, Michael Chandler.

Michael is a three-time Bellator MMA Champion who, in 2020 signed on with the UFC. He won his first fight against Hooker in which he won Performance of the Night and subsequently lost to Charles Oliveira for the UFC Lightweight Champion. He is schedule to fight Gaethje in November.

But not only is Chandler an extremely successful fighter, he is also a devoted family man to his wife and son (we spend a lot of time talking about the dichotomy between the two).

“Pleasing everybody only leads to disaster.” Tweet That— Michael Chandler

“When we watch somebody from afar fail, we get the opportunity to be inspired by how they respond.” Tweet That— Michael Chandler

Everything in your life is a result of the choices you make. So, as I said in my last Friday Field Notes, making better decisions will inevitably lead to better results.

And, that’s exactly what we’re talking about for the month of September inside our exclusive brotherhood, the Iron Council. We’re talking about Creating Your New Reality and we’ll be drawing from Don Miguel Ruiz’ book The Four Agreements.

When you band with us, not only are you going to be participating in this discussion, you’re going to be completing challenges and assignments all designed to push you farther than you’ve gone before and, of course, reap the benefits that come with it.

If you want a great discussion and the accountability, camaraderie, and brotherhood that comes with it, join us inside the Iron Council today.

GREG ELLIS | Fatherhood in the Crosshairs, Part I
Next Post: When Vision Becomes Reality