There are two days you have no control over – the day you’re born and the day you die. Every other day in life represents an opportunity to choose how you decide to live it. My guest today, Dakota Meyer, calls this “Own the Dash.” The dash is all the days between your date of birth and your date of death.

Dakota Meyer is a retired Marine and the recipient of the highest military honor one could earn, the Medal of Honor. Today we talk about how he views the events that earned him that recognition, overcoming an attempted suicide, how he has redefined himself through living in service of others, and how he owns the dash. 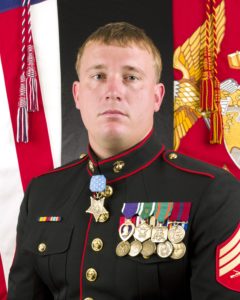 My guest, Dakota Meyer is a Marine, a Medal of Honor recipient, a New York Times Bestselling author, a business owner, and probably one of the most humble men I’ve had the privilege of meeting.

In 2009, he and his squad were ambushed by Taliban insurgents where he learned some of  his team members were missing. He went back to find them and, in the process, rescued 12 wounded and provided cover for another 24 Marines and Soldiers.

I was absolutely blown away with his perspective on those events (which was not what I expected) and the subsequent depression and failed suicide attempt that followed. Since then, Dakota has gone on to found a successful construction company and has now dedicated himself to serving others and allowing others to use his platform to share messages of inspiration across this nation.

Sit back and buckle up. Dakota is one of the most real humans I’ve ever met as he shares some of his personal stories (good and bad) that have made him who he is today.

“My goal is to change the world and if that’s too big for you to believe in, you don’t need to be on my team.” Tweet That— Dakota Meyer

“No politician is ever going to make America great again. It’s already great and I’m going to show the world why it is by showing all these incredible people who make up America.” Tweet That— Dakota Meyer

Sovereignty: The Battle for the Hearts and Minds of Men

As most of you know by now, we’re very close to the launch of my first book, Sovereignty: The Battle for the Hearts and Minds of Men (February 1st, 2018) and I could not be more proud of the way it turned out. From the exterior cover to the interior layout to the message and words used, this is a book that will impact millions of men across the planet.

I wrote it from personal experience in living my life without the control we are all born with. We, as men, have given away so much of our power in the form of lies, excuses, and rationalizations designed to keep us safe and comfortable.

This book is about reclaiming that power and sovereignty by stripping away the lies we tell ourselves and adhering to a code of 13 virtues designed to help a man wrestle back ultimate ownership in his life.

If you’re interested in downloading the introductory chapter for free and being notified when the book is available, head to www.orderofman.com/book.

“You have to own your failures too.” Tweet That— Dakota Meyer

“One day you’re going to be tested and whether you succeed or fail has already been determined. It’s determined by all the millions of decisions you’ve made up to that point.” Tweet That— Dakota Meyer

The Myth of “Toxic Masculinity”
Next Post: Men are Providers