Every single one of us has to start somewhere. When we look at the guys at the top, however, it’s easy for us to jump to the conclusion that they’ve always been there. What we fail to see is the years of toil, effort, and struggle that those men at the top endured along the way.

Today, I am joined by Sal Frisella, who does a little bit of everything at 1stPhorm from running the organization to sweeping the floors. Today, he’s here to talk with us about where he started, how he had to restart along the way, playing the long-game, how to create a culture of winning, and why everyone needs to pay their dues.

“Not everybody is designed to lead but everybody wants to be part of a winning organization.” Tweet That— Sal Frisella 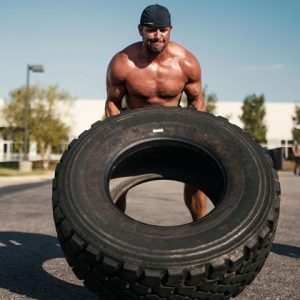 My guest today is none other than, Mr. Sal Frisella.

He is the VP of Operations for 1stPhorm, one of the largest muscle and nutritional supplement suppliers. But, when I asked him about his title, he explained to me that he doesn’t really use that title because he does a little of everything, from running the organization to sweeping the floors. And, after visiting the 1st Phorm headquarters personally, I can tell you that is true.

After he faced a gruesome injury on his track to become a professional baseball player, he had to rethink his approach to life and create something new entirely. That’s when he started in the early years of 1stPhorm with his brother, Andy Frisella.

Gents, you’re going to love this episode. I’m inspired every day by this guy and you will be too.

“Men of character are built.” Tweet That— Sal Frisella

“A big problem with society now is accountability. Everybody wants to blame others for all of their problems.” Tweet That— Sal Frisella

If you’ve been listening for any amount of time, you know that I believe it’s no surprise that our boys are facing an uphill battle. In fact, if you look at the statistics, you can clearly see that boys are falling behind on some very serious and alarming metrics from academics, to depression and suicide, drug abuse, violence, criminal activity, college rates, and income to name a few.

If you’re a father of a boy between the ages of 8-15, we want to equip you with the tools you’ll need to usher your son into manhood. And, that’s exactly what we’re doing at our second Legacy Experience on April 11th-14th, 2019.

All you have to do is get to Las Vegas with your son and we’ll take care of the rest from food and transportation to an array of physical, mental, and emotional challenges all designed to push and test both of you, forge deeper connections, and help your son go from boy to man.

If you want to learn more and lock in your seat, head to www.orderofman.com/legacy.

“There is only one way to lead and that’s by example.” Tweet That— Sal Frisella

“All great relationships are forged, and they’re forged through pain and struggling.” Tweet That— Sal Frisella