You never know when you’ll be placed in a survival situation. Whether it’s a natural disaster, becoming lost in the wilderness, or surviving a bear attack (like we talk about on the show today) your knowledge of survival skills could literally spell the difference between life and death.

At the very least, your ability to successfully navigate a dangerous situation says a lot about who you are as a man.

My guest today, survival expert and TV Show host, Creek Stewart, teaches us the basics of survival, the biggest survival mistakes people make, and how to be prepared for any situation.

“I started doing survival skills because they were fun and I still do them almost 20 years later because they matter.” Tweet That— Creek Stewart 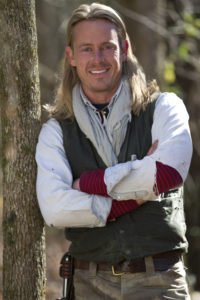 Creek Stewart is a survival expert who has honed his survival skills through his lifelong study of outdoor living and thousands of hours in the field. He started leading survival skills courses at the age of 21, and is the owner and founder of Willow Haven Outdoor Survival Training School, located in Central Indiana.

In 2013, Willow Haven was named one of the “5 Top Adventure Trips in the US” by Chicago Magazine and one of the “Top 10 Survival Schools” by MSN Travel.

Creek is currently the Lead Trainer for the new survival competition series, Escape the Woods.

“When you’re in a survival scenario, fire is your best friend in the woods.” Tweet That— Creek Stewart

“There’s just something about a connecting with the outdoors that is powerful.” Tweet That— Creek Stewart

“There’s a lot of lessons that come from survival skills and the struggle to master them.” Tweet That— Creek Stewart

“When you’re down and out, survival is 90% mental and 10% physical.” Tweet That— Creek Stewart

5 Traits Bad Leaders Wish They Knew
Next Post: The Definitive Guide to Podcasts for Men