As many of you know, in January of this year, my oldest son and I started building a canoe. As we embarked upon this project, many of you introduced me on Instagram to a professional boat builder named @trentpreszler.

Fortunately, Trent and I built a relationship as he shared some of his own successes and failures. When I found out he had a new book coming out called, Little and Often, I knew that I needed to have him on the podcast.

Today, Trent and I talk about why he decided to build a canoe with the tools his dad left him, what the canoe symbolizes and how important it has been throughout the history of the world, why we place our fathers on pedestals they don’t belong, becoming your own man, why our scars are important, and how little and often soon becomes great.

“I think he knew and wanted me to find a place in the world for myself; to do that, I had to find a purpose.” Tweet That— Trent Preszler 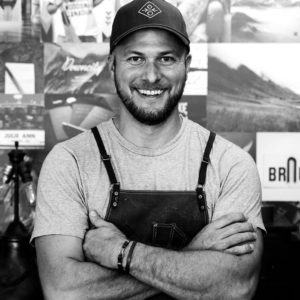 My guest today is a man I was introduced to by many of you when I began our canoe-building project in January of this year.

His name is @trentpreszler, and he is a professional boat builder. Many of you have probably seen his works of art (I call them that because they’re absolutely beautiful) which are actually tools that men have been utilizing for thousands of years to improve their station in life.

Trent is the CEO of Bedell Cellars, a winery in Long Island, New York, but in 2014 he began a new path as he built his first canoe with his rancher father’s tools. Since then, Trent has been building beautiful luxury canoes, which, admittedly, is not a path he thought he would find himself on.

Trent has become a friend of mine and someone who is extremely insightful. And, as strange as it may sound, I believe we were destined in a way to connect.

“A big part of my journey has been trying to understand who my father was.” Tweet That— Trent Preszler

“I feel like there’s no greater sense of disappointment than when you disappoint yourself.” Tweet That— Trent Preszler

Many of you are familiar with our Battle Planner, which I developed nearly 5 years ago and have been refining since then. But what you may not be familiar with is the new Battle Planning App that we just released that has turned in our written planner into something that you can carry with you wherever you go in the palm of your hand.

The Battle Planning App will walk you through everything you need to do to make more of the next 12 weeks than most people do all year and, with a daily non-negotiable and daily task section, it will become your one-stop planning, organizing, and strategizing tool.

If you’re interested, you can check out the free version of the app at www.12weekbattleplanner.com and see how it will improve every facet of your life.