All of us are dealt a hand, some harder than others. But as my guest today can attest, it’s not the hand we’re dealt that matters, it’s how we play it.

Today’s conversation is with Nick Santonastasso (who many of you are already probably aware of). He is a bodybuilder, entrepreneur, adventurer, and highly-sought-after public speaker. And, he was born with a debilitating medical condition which left him legless and missing one arm. Today, we talk about overcoming the victim mentality, how to develop confidence, how to view difficult circumstances as a gift, and how to defeat the odds.

“When you’re in the mindset of giving and not expecting anything in return, you’re more likely to see opportunity. ” Tweet That— Nick Santonastasso 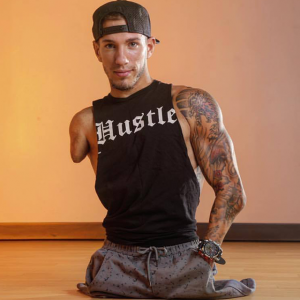 As I mentioned earlier, my guest today is Nick Santonastasso. He has got to be one of the most inspiring people that I know and, if you’re familiar with him, I think you would likely agree.

He was born with a rare medical condition (he’s only one of 12 people born with it and 8 of them are dead). It’s called Hanhart Syndrom and it kept him from developing his legs and one of his arms.

But none of that has stopped him. In fact, if anything, it’s propelled him forward as he’s taken what would both literally and figuratively cripple most and turned it into something extremely empowering for him and the millions he inspires.

He’s tried it all from bowling to wrestling to bodybuilding and now, he’s speaking up as one of the most sought-after public speakers in the world. And, once you listen to this podcast, I think you’ll know why.

“Humans are already disempowering creatures. If you don’t catch your habits and the way you talk to yourself, you could put yourself in a very dark place.” Tweet That— Nick Santonastasso

“Most human beings don’t realize that a bad mindset is the biggest disability.” Tweet That— Nick Santonastasso

One of the most frequently asked questions I receive is something along the lines of “How do I get my life back on track?” I wish there was an easy answer. There isn’t. But, there is a simple one.

It’s called the Battle Plan and it’s a system I’ve been developing over 10 years to take control of my health, relationships, bank account, this movement, and my life in general.

If you’ve been listening to the podcast over the past month, you’ve heard me talk about the Order of Man Maine event (held August 10th-11th). Among the like-minded men you’ll meet, the challenges we’ll participate in, and the activities we have planned, you’ll be working on your own Battle Plan to accomplish more in the next 90 days than you potentially have all year.

If you know you’re meant for more but haven’t found the systems and tools to maximize your potential, join us August 10th-11th in Maine for an event designed to give you the network and framework to take complete sovereignty over your life.

Head to www.orderofman.com/maineevent to lock in your seat.

Support Order of Man by picking up some new merchandise in our store.

The Rise of “Hollow Balls”
Next Post: How to Stand Out as a Man Among Men | BERT SORIN