What causes one man to jump on a grenade to save a fellow Marine when most of us would run the other way? That’s exactly what my guest today, Kyle Carpenter, did when attacked by the Taliban in Afghanistan in 2010. Through his actions, he was awarded the Medal of Honor as the youngest living Medal of Honor recipient.

Today, Kyle and I talk about the days leading up to his heroic action, what exactly happened, his injuries sustained, his road to recovery, and his evolution as a human being since. We also cover his new book, You Are Worth It: Building a Life Worth Fighting For.

“For the first time, I felt and realized what it was like to be part of a group of people and organization that’s greater than any one individual.” Tweet That— Kyle Carpenter 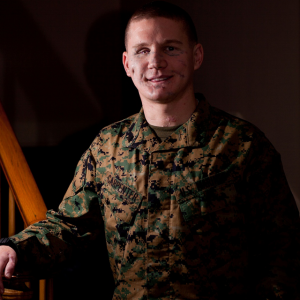 Gentlemen, today I have the honor of introducing you to my friend and the youngest ever living Medal of Honor recipient, Kyle Carpenter.

Kyle joined the Marine Corps at 19 and not long after was deployed with the 1st Marine Division to Afghanistan where he threw himself on a grenade to save a fellow Marine.

This man is one of the most humble people that I know and I’m inspired by his experience, his life, and who is he as a human being.

Before we get into the conversation, I’m going to read you his Medal of Honor Citation:

For conspicuous gallantry and intrepidity at the risk of his life above and beyond the call of duty while serving as an Automatic Rifleman with Company F, 2nd Battalion, 9th Marines, Regimental Combat Team 1, 1st Marine Division (Forward), I Marine Expeditionary Force (Forward), in Helmand Province, Afghanistan, in support of Operation Enduring Freedom on 21 November 2010. Lance Corporal Carpenter was a member of a platoon-sized coalition force, comprised of two reinforced Marine rifle squads partnered with an Afghan National Army squad. The platoon had established Patrol Base Dakota two days earlier in a small village in the Marjah District in order to disrupt enemy activity and provide security for the local Afghan population. Lance Corporal Carpenter and a fellow Marine were manning a rooftop security position on the perimeter of Patrol Base Dakota when the enemy initiated a daylight attack with hand grenades, one of which landed inside their sandbagged position. Without hesitation and with complete disregard for his own safety, Lance Corporal Carpenter moved toward the grenade in an attempt to shield his fellow Marine from the deadly blast. When the grenade detonated, his body absorbed the brunt of the blast, severely wounding him, but saving the life of his fellow Marine. By his undaunted courage, bold fighting spirit, and unwavering devotion to duty in the face of almost certain death, Lance Corporal Carpenter reflected great credit upon himself and upheld the highest traditions of the Marine Corps and the United States Naval Service.

“The foundation of good people that helped make me who I am allowed me to step up in that moment of need.” Tweet That— Kyle Carpenter

“I was in bad shape and knew my time was limited. So, I used my last few seconds to think about my family and how devastated my mom was going to be that I didn’t make it home as I promised.” Tweet That— Kyle Carpenter

Many of you already know that a couple of months ago we held our first-ever Maine Event. It was such a huge success, that I wanted to open it up again as soon as possible.

So, with plenty of notice, we marked our calendars for May 29-31, 2020. Those initial seats have been sold out but we feel like we can facilitate a few more men so we’ve opened up 20 more spots – that’s it.

This is a 2 ½ day event designed to help you forge new bonds with men on the same path as you and give you the tools and framework to accomplish more in a 90-day period that you have potential in your entire life.

Strategies for Vigilance
Next Post: 8 Skill Sets Every Man Needs to Master