There is no doubt that many of us have begun to call into question the enforcement of unconstitutional orders and Covid-19 restrictions, including my guest today, Police Officer with the Port of Seattle, Greg Anderson.

Greg is currently on administrative leave pending an investigation which will likely lead to his termination for insubordination after posting a video on his personal Instagram page expressing his concerns with police officers enforcing unlawful and unconstitutional orders. It’s obviously a very touchy subject and situation but a conversation that needs to be had.

Today, we talk about how we must unite as a country, the use of discretion by police officers, living in fear, the government’s power/control grab, and drawing a line in the sand, and standing by your convictions.

“People enjoy having a circle to be part of. But, sometimes, if you’re not part of a circle that brings positivity to your life you’ll attach yourself to whatever is available.” Tweet That— Greg Anderson 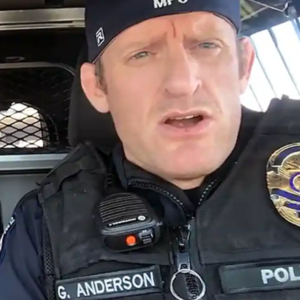 My guest today is Greg Anderson and, although you may not know his name, it’s likely that you’ve seen his video in which he talked about his concerns, as a police officer for the Port of Seattle, of enforcing illegal and unconstitutional orders in the wake of Covid-19.

In addition to serving his community as a law enforcement officer, he is an Army Ranger veteran serving multiple combat tours including one to Ramadi, Iraq in most hostile and dangerous environments one can imagine. Greg is also a Brazilian Jiu-Jitsu blackbelt and the owner of Electric North Jiu-Jitsu and has recently become an outspoken advocate for individual rights, liberty, and freedom.

I think our conversation is likely to fire a lot of you up which is exactly what is needed in times like these.

“As soon as you take away basic human necessity, the gloves come off.” Tweet That— Greg Anderson

“Your own fear of dying actually prevents you from doing the right thing and increases your chances of dying.” Tweet That— Greg Anderson

Men, I’m going to hit the pause button on my conversation with Greg because I want to talk with you about our exclusive brotherhood, the Iron Council.

I’ve received several messages from Iron Council members over the past several months that have told me that the Iron Council has literally saved their life. And, although I won’t get into the specifics, it’s inspiring to me to know that the work we’re doing inside the brotherhood is getting men on the right track and back on the path to thriving and succeeding.

There are a lot of ways we facilitate this but for the sake of time, I’ll tell you that the two biggest factors that go into what we do inside the Iron Council is the framework and the network – the framework point you in the right direction and make the right moves and the network to keep you on track and give you the occasional kick in the ass when you need it.

How to Size People Up and Predict Their Behavior | ROBIN DREEKE
Next Post: 3 Daily Practices Every Man Should Incorporate