“Between stimulus and response, there is a space. In that space is our power to choose our response. In our response lies our growth and our freedom.” Most of us have heard some variation of that quote accredited to Viktor Frankl but most of us don’t know how to manage that space effectively and condition our minds and bodies to respond properly.

That’s why today’s conversation with New York Times Bestselling Author, Scott Carney, is crucial. During our discussion, we talk about the gap between stimulus and response, how to put ourselves into a highly-effective flow state, fight and flight chemistry, and how to rewire your mind and body for maximum results.

“All the benefits of the modern world have given us a huge quality of life.” Tweet That— Scott Carney 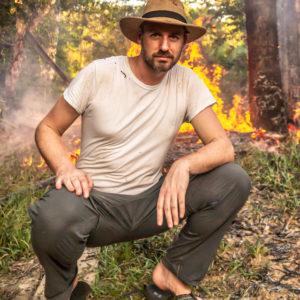 My guest today is New York Times Bestselling, Scott Carney, author of What Doesn’t Kill Us, and his new book, The Wedge.

He is an investigative journalist and anthropologist. He’s done work for Wired, Men’s Journal, Playboy, Discover, Outside, and Fast Company and he gained a lot of notoriety as he trained with Wim Hof. Originally, he intended on debunking a lot of Wim’s teachings but found the practices to be life-changing and a critical part of his life and work.

Scott’s been a friend for several years since he talked with us about his book, What Doesn’t Kill Us and you’re going to hear how much excitement he has for life. Quite frankly, it’s infectious.

“You can learn to trigger your adrenal response when you need it.” Tweet That— Scott Carney

“The more voluntary stress you give yourself, the more elasticity you have when facing real stress.” Tweet That— Scott Carney

As we close out the month of April in the Iron Council, I wanted to give you the heads up and let you know that for the month of May, we’ll be covering the topic of Prioritize and Execute.

Obviously, we’re living in some very interesting times and it’s becoming increasingly difficult for many men to navigate the uncertain waters. So, for the month of May, we’ll be doing a deep dive into effective strategies for organizing and prioritizing your life and, more important, taking massive action that will produce the biggest results.

We’ll uncover variables that are keeping you back and distracting you from what you want to achieve and give you the opportunity to band with 500+ high-achieving men to hold you accountable and potentially give you the kick in the pants you need.

Join us at www.orderofman.com/ironcouncil to learn more and lock in your spot.

Investigative journalist and anthropologist Scott Carney has worked in some of the most dangerous and unlikely corners of the world. His work blends narrative non-fiction with ethnography. What Doesn’t Kill Us was a New York Times bestseller; other works include The Red Market and The Enlightenment Trap. Carney was a contributing editor at Wired for five years and his writing also appears in Mother Jones, Men’s Journal, Playboy, Foreign Policy, Discover, Outside, and Fast Company. His work has been the subject of a variety of radio and television programs, including on NPR and National Geographic TV. In 2010, he won the Payne Award for Ethics in Journalism for his story “Meet the Parents,” which tracked an international kidnapping-to-adoption ring. Carney has spent extensive time in South Asia and speaks Hindi. He attended Kenyon College and has a master’s degree in anthropology from the University of Wisconsin-Madison. He currently lives in Denver, CO

Tips, Strategies, and Protocols for Surviving These Trying Times
Next Post: One Powerful Strategy to Build Influence with Others