Everywhere you turn, you’ll find men living what I call the sedated life. Like robots on an assembly line, these men wake up at the same time, eat the same food for breakfast, drive to work the same way every day, do the same menial tasks for 8-9 hours, drive home, kiss the wife and kids, eat dinner, watch some TV, go to bed, and do it all over again.

My guest today, former Navy SEAL and wingsuit base-jumper Andy Stumpf is the exact opposite of that. And, while we can’t all be Navy SEALs, jump of really high mountains and structures, and travel the distance of 18 miles in a wingsuit, we can all take some calculated risks that make us feel alive.

Today we talk about finding something worth fighting for, eliminating emotions in the decision-making process, why people fail in the application of their goals, and how to live life on the edge. 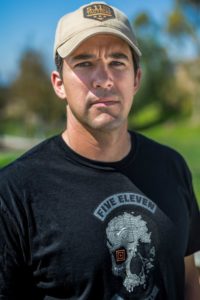 Andy Stumpf (@andystumpf77) is a former Navy SEAL with SEAL Team Five and later joining the most elite counterterrorism unit in the military, SEAL Team Six.

He is also 5.11 and Black Rifle Coffee Company sponsored athlete, and has an affinity for jumping off really tall mountains and perfectly good airplanes.

As impressive as that sounds, he refers to himself as a “professional gravity enthusiast” and rightfully so. He’s completed wingsuit jumps lasting more that 18 miles at speeds of 161 mph.

In other words, the man is a genuine Bad-A and today’s he’s here to talk about living life on the edge.

“I’m not trying to prove anything to anybody. I’m doing it for myself.” Tweet That— Andy Stumpf

“I try to be analytical and non emotion-based when I look at what I’m capable of doing.” Tweet That— Andy Stumpf

Guys, just a quick time out to tell you about an exclusive brotherhood that you are going to want to check out, the Iron Council.

One of the most challenging things for men to do as they’re working to improve every facet of their lives is find other men who are as interested as they are in doing just that. I know you can attest to that because it seems that most men are aren’t concerned with much of anything these days.

But, you’re different. That’s why you listen to this podcast. And, the men inside the Iron Council are different. All of us inside the Council are actively working to improve our relationships, our health, our bank accounts, our business, and our lives.

And, if you’re genuinely ready to do the same, you owe it to yourself to tap into the programs, resources, and brothers inside the Iron Council who are going to help you do just that.

You can find out what we’re all about and unlock access at www.orderofman.com/ironcouncil.

“People fail in application, not understanding.” Tweet That— Andy Stumpf

“The best you can do is to make the environment or community better than when you got there.” Tweet That— Andy Stumpf

The Power of a Coach
Next Post: Save Your Relationship by Becoming a Better Man