Most of you are familiar with Tucker Max. Regardless of what you think about him, there is no fence-sitting. You either love the guy or hate him. But that’s part of the reason I wanted to have a conversation with him – to find out what makes him so polarizing and how he feels about that.

That said, the biggest reason I wanted to talk with him is to learn about his ability to redefine himself from college frat boy to successful entrepreneur, husband, and father. I think we can all relate messing some things up along the path and many of us have or are working on our redemption story. Today, Tucker and I talk about speaking the truth, overcoming judgment, the reality of the “zero f’s” mentality, and, ultimately, how to redefine yourself.

“I had to get sick of my own bullshit.” Tweet That— Tucker max 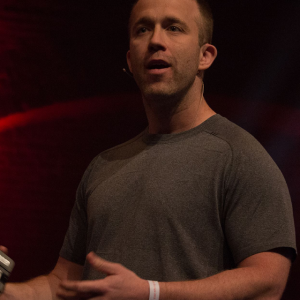 Most of you know my guest today, Tucker Max. If you’re like me, you ran across one of his New York Times Bestselling books in an airport or bookstore. That’s likely the case because he’s sold over 4,500,000 copies of them.

He’s been credited with starting the literary genre, “fratire” where he detailed and documented his college-day exploits. And, although, that’s what made him famous, his ability to redefine himself from those days to who he is today is what really had me interested in talking with him.

“There are enough hardships on earth. Men and women don’t need to be fighting.” Tweet That— Tucker max

“Men have to earn their place. It’s our chance to be a hero.” Tweet That— Tucker Max

Gents, you’ve heard about the Iron Council before but what I wanted to share with you today is something that we are working on starting next week.

We call it the Twelve-Week Battle Plan and it’s a system we’ve developed over the past five years to help you accomplish more in a 90-day span than you potentially have in an entire year. In fact, when I wrote my book, Sovereignty, I completed it in a Battle Planning cycle using the same system the members of the Iron Council are using.

Obviously, life has taken a very strange turn for most of you in 2020 but using the Battle Plan and the accountability found inside the Iron Council will ensure that you get back out ahead of things and make the most of a very strange situation.

Marriage – What to Expect?
Next Post: Winning the War with Coronavirus | DR. GREGORY POLAND