Many of you are familiar with my immersion into the world of Jiu-Jitsu over the past two years. It’s become such a crucial part of my life that I look for every single opportunity to learn more about the practice and train.

With that said, I am joined today by one of the greatest ever to train Jiu-Jitsu and mixed martial arts, Rickson Gracie. Today, we talk about his incredible life, what it’s like to be a Gracie, the shifting paradigms of becoming a mature man, developing and living with a personal code of honor, the physical, mental, and spiritual realm of Jiu-Jitsu, and how Jiu-Jitsu allows you to live a life in flow.

“Jiu-Jitsu for me is an expression of peacefulness, love, control, and effectiveness.” Tweet That— Rickson Gracie 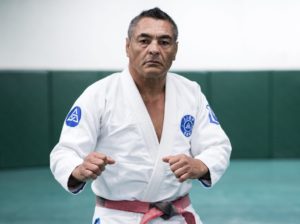 My guest today is none other than Rickson Gracie, the son of Helio Gracie (the man who developed Brazilin Jiu-Jitsu). Rickson is a 9th degree red belt in Brazilian Jiu-Jitsu and a mixed martial artist.

He was widely considered to be the best fighter of the Gracie clan and one of the toughest individuals in the world. He’s been training since he was six, received his black belt by 18, and subsequently went on to be undefeated in his professional fight career.

He is also the author of his upcoming book, Breathe: A Life in Flow, the subject of the documentary, Choke, and the upcoming Netflix Documentary called Dead or Alive.

Needless to say, this man knows as much about Jiu-Jitsu (if not more than) as any other as any other man on the planet and I’m honored to have him here today.

“You have to visualize the worst moments in order to cope with the unpredictable.” Tweet That— Rickson Gracie

It’s no secret that having a dedicated, capable band of brothers in your corner is one of the most important factors in a man’s life. That said, it seems to be increasingly difficult to find high-caliber men who are willing and able to stand in your corner and assist you on your path to becoming the man you’re meant to be.

That is why we’ve created the Iron Council – to bring together high-caliber men of all walks of life and empower you with the network and framework for success.

Most of you know how crucial it is to have men in your corner. We make it possible by bringing these men together and giving you access to the tools, resources, conversations, and accountability required to thrive.

You can learn more and lock in your spot at www.orderofman.com/ironcouncil.

7 Relationship Pitfalls Every Man Should Avoid
Next Post: Manufacture Hardship