Today, I sit down with a fascinating man. His name is Mat Best and many of you know from his viral videos for Black Rifle Coffee Company. But what you may not know is how he views his military service as an Army Ranger with five combat tours.

During our conversation, we talked about how he views his service, his continual support of military veterans, how he founded his mission after the military, where he stumbled along the way, and how he helped turn a simple coffee company into a household name.

“I think people should focus more on bettering themselves and doing what they truly want in life rather than making excuses.” Tweet That— Mat Best 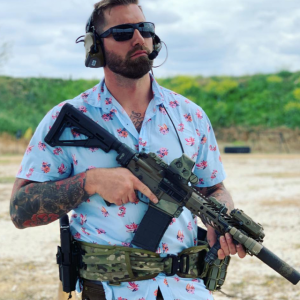 As I stated earlier, my guest today is someone most of you are probably familiar with. His name is Mat Best and he is a former Army Ranger and the co-founder of Black Rifle Coffee company along with several other companies he founded since leaving the military.

He and I had the opportunity to sit down at Total Archery Challenge a couple of weeks ago in Park City to talk about his military service, how to lead an incredible organization in Black Rifle Coffee Company, and his new book, Thank You For My Service.

Gents, I think you’re going to enjoy this one as you might see a side of Mat you haven’t seen before.

“What I lack in intelligence, I make up in grit and work ethic. It’s the only reason where I’m at today.” Tweet That— Mat Best

“Consistency builds character. The more you do the thing you want to be, you become that thing.” Tweet That— Mat Best

One of the most frequently asked questions I receive is something along the lines of “How do I get my life back on track?” I wish there was an easy If you’re not familiar with Origin Maine, I encourage you to get familiar with them as soon as you can. Whether or not you’re into Brazilian Jiu-Jitsu or not is irrelevant as they do so much more than make gi’s and rashguards.

Their goal is to restore American Manufacturing and with their new denim line, boot line, and Jocko Supplements, they are on the path to doing just that.

I personally use their supplements, specifically, their Super Krill, Joint Warfare (for the aching joints since ramping up Jiu-Jitsu), Molk, and their new product, a cognitive enhancement called Discipline Go.

Without Vision, Nothing Else Matters
Next Post: Who’s Got Your Six?