All of us have fallen behind or gotten of track somewhere in our lives (some more than others). Only some decide to get back on track and take control of their lives – to redeem themselves if you will. And, who doesn’t respect the hell out of a man who has hit rock bottom and risen from the ashes?

That’s why I wanted to invite Wes Watson on the podcast. He’s arguably one of the most influential men I’ve had the honor of talking with because of his no-BS, straight-talking approach to improving your life. Today we talked about Wes’ 10-year prison sentence, the power of gratitude in dire circumstances, overcoming regret and shame, developing a new stream of consciousness, and how to build your own redemption story.

“During times of pain, do you run to personal growth or run to vices to hide that pain?” Tweet That— Wes Watson 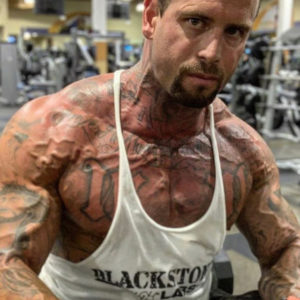 My guest today is Wes Watson, strength and fitness coach, but he’s so much more than that. Wes simply uses health and fitness as a medium for transforming your mind and your life.

Wes spent 10-years in prison and was quickly spiraling into a life of chaos and destruction but while serving his prison sentence, he began to transform his life through the power of his thoughts and daily actions.

After being released from prison, Wes has become one of the most powerful voices in self-development, has built a massively successful business, and has inspired thousands of people to transform their own lives through his mentorship and coaching.

You’re going to hear in this conversation why I wanted Wes to join us as the fire he brings can’t help but motivate and inspire you to get your life on track.

“Your energy has to be congruent with the message you’re passing on.” Tweet That— Wes Watson

“The biggest injustice you can do a man is to accommodate his shortcomings.” Tweet That— Wes Watson

Gents, we’re rapidly approaching father’s day and, as we do, it was important to me that inside of the Iron Council we have a discussion about redeeming the relationship with our fathers.

Regardless of your relationship with your father, it’s likely that some conversations have been left unsaid and there is strain between you and him. And, regardless of your ability/desire to reconcile with your father, there are steps you can take to come to terms with the relationship that you have with him so you can drive on in your own life with clarify, focus, direction, and purpose as a man.

These aren’t comfortable conversations, challenges, and discussions we’re having inside the Iron Council this month but they’re completely necessary if you want to break the chains that may have been holding you back from becoming the man you’re wanting to become – not the boy in his father’s shadow.

If you’re ready to have these conversations, challenges, accountably, brotherhood, and more, join us at www.orderofman.com/ironcouncil to learn more and lock in your spot.

MAT FRASER | Becoming the Fittest Man on Earth
Next Post: Two Factors That Make a Male a Man