Regardless of your station in life, I think it’s safe to assume that every single one of us has a desire to transform our lives in some way. There is a myriad of reasons why a lot of people aren’t able to make that transformation happen: lack of motivation, discipline, drive, etc.

Today, I am joined by former Navy SEAL, Remi Adeleke to talk about how he went from a son of a wealthy and powerful man in Nigeria to growing up on the streets of the Bronx, to becoming a Navy Seal, and eventually a Hollywood actor and screenwriter, and ultimately, how he transformed his life.

“Luck is when preparation meets opportunity.” Tweet That— Remi Adeleke 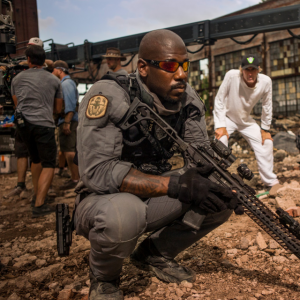 I had the opportunity to sit down with an incredible man last week. His name is Remi Adeleke.

You may know of him as a former Navy SEAL and Hollywood actor but what you might not know is how this man was born to a chief of an African tribe in Nigeria, lost his father at age 5, ended up moving to the states with his mother, brother, and not a penny to their name, starting selling drugs and running scams to make some money, getting into the Navy under some questionable circumstances, and eventually becoming a Navy SEAL and Hollywood actor.

Guys, you are going to be absolutely blown away with this human and his inspiring story. So, sit back, take some notes if you want, and be inspired to make more of your circumstances and transform your life.

“If you want to be successful, you’ve got to figure it out by doing the extra work.” Tweet That— Remi Adeleke

“Every boy needs a man to teach him how to be a man.” Tweet That— Remi Adeleke

When I say the term, “Wild Man,” I think we all have some ideas of what that individual may look like and how he might behave.  Most of us, as men, have been conditioned to silence the “Wild Man” within us and while there are times that certainly should be the case, there are other times where it may be required to let him out of his cage.

That’s exactly why we’re going to be discussing this inside the Iron Council, our exclusive brotherhood, for the month of May. Civilized behavior serves its purpose but too many of us have locked away our wild nature and thrown away the key.

This month will be all about rediscovering who we are as men and why it’s critically important to tapping into our primal roots. You’ll band with a Battle Team of 14 other men, be challenged to take on some new adventures and risks and be held to task in accomplishing worthy objectives in your life.

If you want to learn more, join us at www.orderofman.com/ironcouncil.

“To be a man means to keep your word, become a person of integrity, and a servant leader.” Tweet That— Remi Adeleke