As many of you know, I have begun to immerse myself more deeply in the world of hunting. I’ve always been fascinated with the life and mindset of a hunter but never grew up being too exposed to it. Now that I am, my mind has been opened to what it truly means to be not only a hunter but a conservationist as well.

Today, I am joined by a man I have been watching for a long time, Mr. Donnie Vincent. He is a film-maker, a conservationist, a hunter, and one of the most trusted voices when it comes to the symbiotic relationship between the hunter and the hunted.

We talk about we have not evolved out of hunting, how ignorance around hunting is hurting all of us, how to become better stewards over our resources, and how to become the hunter.

“You cannot rescue anyone or anything from too far a distance.” Tweet That— Donnie Vincent 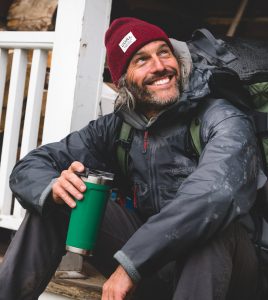 My guest today is Donnie Vincent and he is someone I deeply admire and respect regarding his work with the wilderness.

This is a man who has truly immersed himself in the connection with nature and is one of the leading voices and champions of sustainable and ethical hunting.

He is a biologist, hunter, explorer, conservationist, sportsman, and filmmaker. But one of his most powerful pursuits from my perspective is that of “storyteller.”

Donnie creates amazing films documenting his journey into the wilderness, his connection with nature, and the hunts he pursues.

If you’ve ever considered hunting (or already are), following Donnie should be an absolute requirement.

“I’m either working out, grocery shopping, or I’m in the woods trying to get groceries.” Tweet That— Donnie Vincent

“Hunting has always been at the forefront of my mind. When I was a kid, it was literally all I ever thought about.” Tweet That— Donnie Vincent

“[Hunting] is a good engagement all around if done responsibly, if done with a conscience, and always having an idea of where you are and how you’re engaging with the wildlife.” Tweet That— Donnie Vincent

One direction the Order of Man has gone that I did not anticipate it going when we launched 4 years ago is turning around and offering a hand to the boys who we would have become men.

That’s why, last year, we launched our inaugural Legacy Experience, and father-son event designed to forge deeper and more powerful bonds between dads and their boys. And, after a huge level of success, we’ve decided to open up the second-ever Legacy Experience with some updated events, challenges, and features.

If you’ve ever wanted to participate in a rite of passage with your son, this is the event you’ve been waiting for. All you have to do is get to Las Vegas on April 11th. From there, we’ll shuttle you and your son to our lodge in the mountains of Pine Valley for an unforgettable 3 1/2 day experience designed to challenge you and your son physically, mentally, and emotionally and equip both you and him with the tools necessary to succeed as men in an ever-challenging landscape of modern times.

You can head to www.orderofman.com/legacy to learn more, watch a film from our last event, and get registered.

“Hunting, fishing, and collecting your own wild forage from the forest is so much more rewarding than just strolling into the supermarket.” Tweet That— Donnie Vincent

DAVID GOGGINS | Master Your Mind and Defy the Odds
Next Post: Rise Above the Victim Mentality | TRAVIS MILLS