I think most of us believe there is a reason we’re here on this planet. But I personally know how hard it can be to uncover and discover the reason that is. It seems daunting considering how easily we can become consumed with trivial matters and the distractions of modern culture and society.

But my guest today, Eric Thomas (AKA, The Hip Hop Preacher), has been helping millions of people around the world ignite their power and purpose. Today, ET and I talk about overcoming the “passive boy,” becoming more of who you are – not a clone of someone else, why you don’t need the world to approve to succeed, the battle between the “two you’s,” and finding immense opportunity in crisis.

“People treat you differently when they celebrate you than when they tolerate you.” Tweet That— Eric Thomas 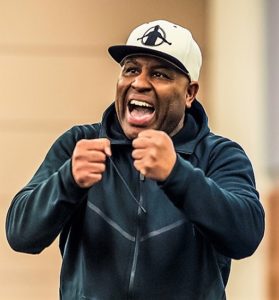 Eric Thomas is a Ph.D., an author (including his latest book, You Owe You), and incredibly powerful speaker, a pastor, and so much more.

His incredibly unique and powerful approach to personal performance has made him one of the most highly sought-after public speakers in the world and a powerful force for motivation and inspiration on social media.

As CEO of his Consulting Firm, he’s worked with dozens of hugely successful organizations and Fortune 500 companies including General Electric, AT&T, Nike, Under Armour, UPS, and many franchises within the MLB, NBA, and the NFL. You’re going to hear exactly why that is in this powerful conversation. Enjoy.

Men, the day is finally here that the Iron Council, our exclusive brotherhood, is finally back open after being closed for the last several months.

If you’re not familiar with what we do in the Iron Council, you can head to www.orderofman.com/ironcouncil to watch a quick video and learn more. But for now, I can tell you that it has become one of the most powerful men’s brotherhoods out there. When you band with us, you’re going to unlock all the tools, resources, and accountability to get your fitness in check, your relationships in order, and your finances squared away. But most importantly, you’re going to learn how to start where the real work begins – with you.

If you’re ready to learn more and walk shoulder-to-shoulder, brother-to-brother, with nearly 1,500 men, we invite you to band with us at www.orderofman.com/ironcouncil.