Becoming better leaders is something all of us are striving to become. And, there’s no better place to learn how to be an effective leader than the battlefield of Ramadi, Iraq during one of the most dangerous times during the Iraq War.

My guest today is Dave Berke, an instructor with Echelon Front and retired Marine Corps officer and fighter pilot. Today, we talk about taking those leadership lessons and applying them in civilian life, the importance of finding purposeful work, how to keep your children from going soft, delegating roles and responsibilities, and overcoming the obstacles of reality. 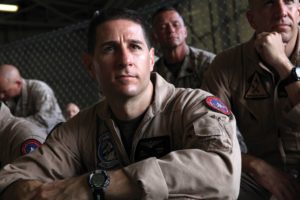 My guest today is Dave Berke.

He is a retired Marine Corps officer, fighter pilot, and ground combat leader. He spent three years as an instructor at TOPGUN and later went on to support task unit bruiser on the ground in Ramadi.

He’s since gone on to become a leadership instructor with Echelon Front on the subject of leadership, decision making, risk mitigation, and creating winning teams.

“Our brains are wired to do something that has commitment and meaning.” Tweet That— Dave Berke

“There are no shortcuts. There’s the path, the commitment to that path, and moving down it every single day.” Tweet That— Dave Berke

Men, one of the biggest reasons so many men have joined the Iron Council is the accountability and proximity to other men who are accomplishing big things in their relationships, business, and life.

So many men have bought into the lone wolf thing for so long. I did for a while and realized that because I wasn’t willing to band with other men, I was limiting myself from perspectives and ideas that I didn’t previously have access to. I found myself feeling like there was more to life but not really knowing what it was.

If that’s been nagging at you, I’d have you consider that you aren’t likely to find the answers you’re looking for. I had to create what I was looking for. All you have to do is tap into it – the 430+ brothers who have raised their hands and said, “I want more out of my life.”

If this sounds like you, learn more and lock in your seat at www.orderofman.com/ironcouncil.

“Every time you solve somebody’s problem for them, every time you give something to somebody that they could get for themselves, you’re hurting them.” Tweet That— Dave Berke

20 Tips to Winning With Your Wife
Next Post: 10 Ways to Win With Your Kids