If you’re anything like me, when you were a kid you had dreams of becoming an elite warrior or a NASA Astronaut – maybe both. My guest today is a man that took those dreams and is making them a reality.

His name is Mario Romero. He’s a former Navy SEAL, NASA Diver, and aspiring NASA Astronaut and he’s here today to talk about what that path looks like, his struggles along the way, failures and setbacks, his path to redemption, and how he’s a man who is currently living out every boy’s dreams.

“Working at NASA is what every kid has in the back of their minds. What I wanted was to be was a SEAL.” Tweet That— Mario Romero 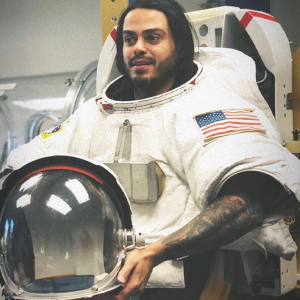 As I mentioned earlier, my guest today is Mario Romero. He spent over 8 years as a Navy SEAL and, upon leaving the Teams, he enrolled in college and achieved his Bachelor’s Degree in Pure Mathematics from Columbia University.

And, to add to that, over the past year he has been working with NASA as a NASA Diver preparing both the technology and astronauts for the demands and rigors of space travel.

He’s had a ton of ups and downs along his path and, despite his tremendous success in life, he’s one of the most humble individuals I’ve had the honor of sitting down with.

“I gave up all the things that were taking my attention away from what I wanted to achieve. .” Tweet That— Mario Romero

“Growing up, I didn’t know how to escape poverty. The military was the most obvious way out.” Tweet That— Mario Romero

You’ve likely heard of the philosophy of Stoicism. You’ve probably even read Marcus Aurelius’ book, Meditations and/or Ryan Holiday’s The Obstacle is the Way, Ego is the Enemy, and Stillness is Key.

And, if you’re interested in incorporating the teachings of the ancient Stoics in your life, I want to invite you to join the Iron Council as that is what we’ll be talking about for the entire month of November.

We’ve got the tools and resources to help you take a concept/philosophy and actually implement it in your life for better results in your marriage and career. We don’t want to just talk about what it means to be a Stoic, we want to apply it for the betterment of ourselves and others. If you’re interested and want to learn more, head to www.orderofman.com/ironcouncil.

The Perfect Way to Start and End Your Day
Next Post: How to Make Better Decisions Using the OODA Loop | FRIDAY FIELD NOTES