No one ever accused me of being funny but that doesn’t mean I don’t see the value of humor and comedy in life and in society in general.

Today, I’m joined by my good friend, Keith Yackey, who over the past couple of years has transitioned from the corporate stage to the comedy stage. Today we talk about why fear keeps us from doing great things, why we as a society need comedians, the power of instant feedback on our path to growth, and how to be funny.

“Everybody can get to a degree of being funny. It’s a skill like anything else.” Tweet That— Keith Yackey 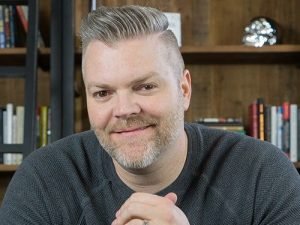 My guest today is my friend, Keith Yackey.

He’s been extremely successful in the corporate and event world, building an 8-figure investment firm in just two short years.

But the reason I wanted to have him on the podcast is for his more recent endeavors, stand up comedy. It’s something that has always been fascinating (and scary) to me so, to watching Keith go from, comedy newcomer to performing in some of the biggest comedy clubs in the world, has been incredible to watch.

I hope you enjoy today’s conversation with Keith as he shares with us how to become funnier and why it’s so important.

“There are so many things I’ve learned from stand-up comedy. One is having the guts to try to something new.” Tweet That— Keith Yackey

“I’m “naturally talented” because I’ve been doing it for 10 years!” Tweet That— Keith Yackey

If you’ve been listening for any amount of time, you know that I believe it’s no surprise that our boys are facing an uphill battle. In fact, if you look at the statistics, you can clearly see that boys are falling behind on some very serious and alarming metrics from academics, to depression and suicide, drug abuse, violence, criminal activity, college rates, and income to name a few.

If you’re a father of a boy between the ages of 8-15, we want to equip you with the tools you’ll need to usher your son into manhood. And, that’s exactly what we’re doing at our second Legacy Experience on April 11th-14th, 2019.

All you have to do is get to Las Vegas with your son and we’ll take care of the rest from food and transportation to an array of physical, mental, and emotional challenges all designed to push and test both of you, forge deeper connections, and help your son go from boy to man.

If you want to learn more and lock in your seat, head to www.orderofman.com/legacy.

“The temptation is to fight harder for your excuses than the results you’re after.” Tweet That— Keith Yackey

“The people who are least offended are those who are actually doing something with their life.” Tweet That— Keith Yackey

Rise Above the Victim Mentality | TRAVIS MILLS
Next Post: No Risk, No Reward | TREVOR THOMPSON