My guest today, Army Green Beret and UFC ranked middleweight fighter, Tim Kennedy, talk with us about how to overcome fear, how to get up and learn from losses, how to recognize strengths and weaknesses, and how to become the sheepdog.

“When the wolf comes around and wants to take advantage of the sheep, the sheepdog is there to protect it.” Tweet That— Tim Kennedy 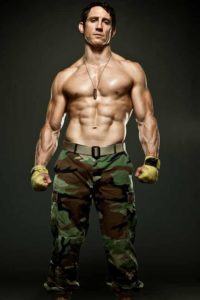 Tim Kennedy is arguably one of the baddest men on the planet.

He is a Army Green Beret and a UFC Middleweight MMA fighter and, he’s one of only a few who fought professionally and served in the armed forces simultaneously.

He’s been fighting professionally for 16 years and serving as a Ranger qualified, Green Beret, Special Forces Sniper for 14 and has been awarded the Bronze Star for valor under fire.

Tim also competed on the Ultimate Soldier Challenge as a Green Beret and was featured as a “Ranger” on the Spike TV series Deadliest Warrior. Tim has also competed in the gruelling 3 day Modern Army Combatives tournament and was one of only three men to be undefeated, as well as three-time champion. He is one of the only three service members to be awarded a black belt in Modern Army Combatives.

In addition to all that, he stars on History Channel’s hit show, Hunting Hitler, founded the Sheepdog Survival Fund, and trains law enforcement officers, first responders, and civilians how to become sheepdogs through his company, Sheepdog Response.

“I’m definitely one of those people who will always run towards the gunfire.” Tweet That— Tim Kennedy

“Anyone who ever says they’re not afraid, is a liar.” Tweet That— Tim Kennedy

“If I die doing the right thing, that is the best and only way for me to exist and live.” Tweet That— Tim Kennedy

Men, the new year is finally upon us. I’ll be frank with you here, I’m not a new year’s resolutions guy.

I don’t need a new year to give me permission to start working on the objectives I have identified in life.

A lot of you are probably the same way. I know the men inside The Iron Council, our elite mastermind, feel the same way.

Regardless of how you feel about resolutions – whether you wait until January 1st to start or you’re thinking about them year round – we have got the tools inside The Iron Council to help you succeed in accomplishing big things in your life.

We’re going to help you identify objectives in 4 key domains of your life, the tactics that will ensure you achieve them, the system of tracking to make sure you stay on point, and the accountability you need to stay the course.

You can learn more about us at www.orderofman.com/ironcouncil. We hope to see you there.

“The thing that defines us is our desire and choice to improve and get back up.” Tweet That— Tim Kennedy

“The reward on the far side of work is so much more satisfying that anything else you can ever have.” Tweet That— Tim Kennedy