This one is special to me. As most of you know, I grew up without a permanent father figure in my life. I’ve mentioned in the past that there was a select group of men who helped mold and shape me into the man that I am today. I’m not sure there is another man in my young life who was as influential as my guest today. His name is Matt Labrum and he was my high school football and baseball coach.

Today, we talk about his influence in my life and thousands of other young men’s lives, the power of allowing kids to fail (including some failures of my own), why competitive sports are so valuable in a young man’s life, why he cut his entire team from the football program, and a man’s responsibility to future generations.

“As long as you have a swing, you have a chance.” Tweet That— Matt Labrum 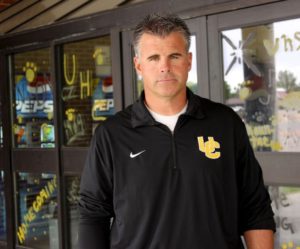 Men, I did this interview a little while ago and I’ve been anxiously waiting to release it to you. Every single one of us has some very influential people in our lives.

Today, I’m talking with probably the most influential man in mine, especially as a young boy learning to become a man. He is a high school educator. He has been teaching for more than two decades and, in addition to that, he is a high school baseball coach (when I was in school, he was the head football, basketball, and baseball coach).

He gained some national attention several years ago after cutting his entire football team from the program for grade and attendance issues, and how his team was showing up in the community and at school.

This is a man I admire and respect as he shaped a lot of who I was as a young man and who I am still becoming. He never took it easy on me. We talk about two experiences in particular during this conversation but I never doubted how much he cared about my progress and the progress of the boys under his care.

“I try to use sports as an avenue to help young people grow.” Tweet That— Matt Labrum

“We are definitely doing a disserve to the young people by not allowing them to fail, and for coddling them, and making excuses for them.” Tweet That— Matt Labrum

Guys, part of the reason team sports are so valuable in a young man’s life is the band of brothers that he’s able to build. He’s able to learn and grow with other boys who want to succeed at the same level he does.

But for most of us, that team camaraderie and brotherhood goes away after high school. That doesn’t mean it isn’t’ as important as it once was. It just means that we get busy with life and forget to build a new band of brothers.

This is why I created the Iron Council. This is a brotherhood of men working together to achieve big results in their lives. You’re going to band with other men who are succeeding and some who are still trying to find their way.

If you’re missing a tribe – a group of men – who will push you, motivate you and inspire you to do bigger and better things with your life, I’d encourage you to join us inside the Iron Council.

Head to www.orderofman.com/ironcouncil to learn about what we’re up to and claim your seat at the table.

“Nothing stays the same. Everything changes all the time. What are you going to do to be successful?” Tweet That— Matt Labrum

“If the parent will parent instead of being the defender, great things will happen.” Tweet That— Matt Labrum

The Folly of “Zero Fu*ks Given”
Next Post: Crafting the Perfect Morning Routine