50 Ironmans in 50 states in 50 days: This is what my guest, James “Iron Cowboy” set out to do. Everyone said it was impossible. Nobody thought it could be done. He disagreed.

In 2015, James set out for the impossible and 50 days later completed what he set out to do in the face of overwhemling odds, physical damage, mental exhaustion, and obstacle after obstacle to overcome.

Today he shares his journey.

“You can plan yourself to failure. At some point, you’re going to have to execute and put something into action.” Tweet That— James "Iron Cowboy" Lawrence 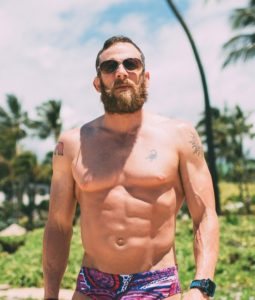 James Lawrence is an endurance athlete and Ironman triathlete. He holds two Guinness World Records in 70.3 and 140.6 triathlon racing.

In 2012, James shattered the World Record by over 10 races, winning 2 titles and placing 2nd in five others.

After 2012, James “Iron Cowboy” Lawrence wanted to test the true limits of his mind and body and wanted people around the world to join him in an effort to raise money for childhood obesity and empower them to take control of their own lives.

So, he set out for the unthinkable: 50 Full Distance Courses, 50 Consecutive days, through all 50 States.  He’d cover 140.6 miles each and every day, for 50 consecutive days.  A 2.4 mile swim, followed by a 112 mile bike ride and then finishing up by covering 26.2 more miles, which is the marathon.

In 2015, he completed what everyone else said was impossible. This is his story.

“Every singler person, including my sponsors, said it was impossible.” Tweet That— James "Iron Cowboy" Lawrence

“Most people quit right before their mind and body come into alignment with each other.” Tweet That— James "Iron Cowboy" Lawrence

Iron Cowboy Documentary | The Story of the 50.50.50 from Mystery Box on Vimeo.

Men, I want to invite you to join The Iron Council before the new year. If you really want to do something about your life – regardless of the level you’re at righ now, finding other like-minded men to help you do just that is critical

Inside the Iron Council, you’ll join 180+ other men who are taking action on improving their lives and, in turn, improving the lives of those they have a responsibility for.

If you’re looking to keep your marriage alive, maximize your earning potential, lose that spare tire, connect with your kids on a deeper level, ask for a raise, get a promotion, feel better about yourself, or any other goal that might be on your mind, The Iron Council is the place for you.

We’ve built the framework that will allow to accomplish big things in the coming year. You’ll have the tools, resources, discussion, and – the big one – accountability from the other 175 inside the council.

If you’re interested in learning more and ensuring this year is ACTUALLY different, join us at www.orderofman.com/ironcouncil.

“Let’s not go out and try to prove everyone wrong, let’s go out and prove ourselves right.” Tweet That— James "Iron Cowboy" Lawrence