What does it mean to be a complete beast? This is a question my guest, Jack Donovan, attempts to answer in his latest book, appropriately titled, A More Complete Beast. There is a reason the title is likely to resonate with you, as a man. Each of us understands that we are both man and beast.

Today we cover so much about the subject of masculinity including why being a man has to be an intentional choice, the power of what he calls the “conquering eye,” how to avoid becoming a victim of victims, and how each and every one of us can become a more complete beast.

“Men have never marched and fought in wars for the right to cry. Men have never wanted that. That’s something others are pushing on them.” Tweet That— Jack Donovan 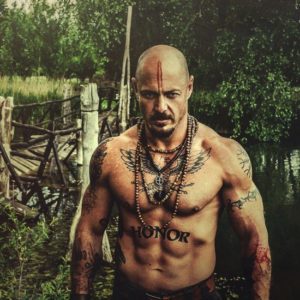 Gentlemen, my guest today is a man a lot of you are familiar with and someone I’ve had on the podcast before.

His name is Jack Donovan and he is the author of several books on the subject of modernity and masculinity including The Way of Men, A Sky Without Eagles, Becoming a Barbarian, and his latest release, A More Complete Beast.

As you may know, Jack is a fascinating man and probably one you wouldn’t expect to hear on this podcast (in fact, I made a joke about Jack, a pagan, and myself, a Mormon, walking into an ax-throwing bar just after this interview). That said, his views on the subject of manliness and masculinity, although controversial, resonate with so many of us because they’re spot on and refreshing in a time when more and more of society has a hard time even discussing what it means to be a man.

“[Men] are encouraged not to be masculine in many ways. Most of the messages you get through the mainstream media are for men to become more like women.” Tweet That— Jack Donovan

“Do you want to be the lowest version of yourself – never get stronger, never challenging yourself – or do you want to go out and seek those challenges and become a man?” Tweet That— Jack Donovan

Very simply, the Iron Council is a band of brothers who want to help you improve in every facet of your life. You could do life on your own. You may even experience some moderate level of success.

But I’d argue, along with my guest, that there is power in banding with other men in order to achieve more. When you work shoulder-to-shoulder with other men who have experienced what you are going through, you tap into a powerful perspective you may not have considered before and arm yourself with a new set of tools to help you succeed in your family, health, business, and life.

When you join the Iron Council, you’ll have access to these tools like accountability, digital resources, our Battle Plan system, and so much more. To learn more and lock in your seat, head to www.orderofman.com/ironcouncil.

“Living is about thriving. Are you going to try to thrive or just complain about how you got dealt a bad hand?” Tweet That— Jack Donovan

“What do you have control over in your life? You should be spending a whole lot more time worrying about that than the things you have no control over.” Tweet That— Jack Donovan

Set Yourself Free | PETE ROBERTS
Next Post: Live by a Code, or Die Without One | FRIDAY FIELD NOTES