Home » Blog » SELF MASTERY » Are You Ready to Start Your Journey?

If you listen to the Order of Man podcast or spend any time in the Facebook group, you’ll no doubt have heard about the Iron Council – the exclusive brotherhood for those looking to take their game to the next level.

So, what is an “exclusive brotherhood” anyway, and is it worth paying for?

I’ve been a part of the Iron Council (IC) for well over a year now and have been witness to its inner workings. I’m a Battle Team Leader and a member of the OoM senior leadership.

I am not an impartial observer – let’s just get that out of the way – but I don’t profit from your membership nor am I here to push propaganda.

As part of my role within the IC, I had the opportunity to review the results from the most recent Order of Man survey and got to hear what many of you think about this movement.

One of the more consistent comment threads I saw was a desire to know what actually happens within the Iron Council before “committing” your time and money. I can say with conviction that a free trial option isn’t in the cards and it is nearly impossible to understand the value of an immersive experiential group like this without actually experiencing it for yourself.

You’ll never KNOW how cold the water is until you actually jump in. But for those of you unwilling to take that initial plunge, I’ll share with you a taste of my experience. It may not be what you expected.

For many of you, the cost of joining the IC will seem insane. Especially if you’ve never joined a group like this.

You’ll do the math.

You’ll think of all the things you could do with $800. You’ll worry about bills or debt and feel irresponsible. You’ll think about that tattoo you wanted, or TV, or whatever. You’ll probably fill out the form a few times but not actually click to commit yourself. You may walk away or close the tab on the browser. You’ll think you’re being rational but in time, when you look back, you’ll realize you’re just scared. You’ll also later learn that this is ok.

You will however keep thinking about it, and eventually you’ll click. You’re in. You get the email from Ryan welcoming you to the brotherhood and you’ll feel proud. Why did you wait so long? You do your shaky nervous intro video and post it to the private group platform. Everyone welcomes you and calls you brother. Immediately you dive into the conversations the men in there are having and you breathe a wonderful sigh of relief because you feel “home”.

You’ll jump onto the Friday calls and are ushered into the on-boarding process. A guy named Bubba tells you what’s expected and lays out the challenges for you. The on-boarding guys get you up to speed pretty quickly, then you’re released into the general population and choose a battle team.

You probably came to the IC thinking you more or less had your act together but just needed to tweak a few things and that the guys in here would be able to help you with that. The first month or so is exhilarating. The trouble is, you haven’t seen anything yet.

The topics of the month that we discuss will nearly always seem exciting and interesting at first, but if you really spend the time thinking about them and looking at yourself objectively, there is a good chance they will rock you, or at a minimum make you shudder a little. They’ll come to represent something new you’ll get to discover about yourself. It takes some bravery to let that sink in.

Soon you’ll realize how little you know about yourself, or more importantly, how much there is left to discover.

This is a paradigm shift because the real growth doesn’t take place while you’re directly engaging with the IC brothers. Answering posts in our exclusive forum is fun and can challenge you, but the real change happens when you are in quiet contemplation of who you are. You’ll think back to that comment that so-and-so said that at first pissed you off, but will gradually realize there is a ton of truth there. It isn’t easy hearing you’re arrogant, or afraid, or whatever issue you are working through that you didn’t even realize was sitting there just below the surface.

There will be days that you’ll seriously think of quitting the IC. You might even do it – you won’t be the first and you won’t be the last. You’ll make up excuses like you don’t have time, that it “isn’t for you” or that the $67 is now literally the difference between you having a roof over your head or being on the street; but you’ll know in your gut that it’s crap.

This is part of the experience. Hell, I even quit once and then came back. Trust me, I’m not trying to be dramatic. It’s how it works.

The Iron Council isn’t about finding a workout buddy or being around a higher caliber of men. That’s just a perk. It’s a big one, but one that doesn’t work until you start to figure yourself out first.

If you’re doing it right, being an active member of the brotherhood will rattle your foundation. It will teach you not only that it is ok to be afraid, but how to face those fears and to turn them into your advantage.

The cool thing about the IC however is that it works. The odds are good you’ll make it through the process – though not all do. It’s cliche to say you’ll get out what you put in, but its true so we’ll just keep saying it.

I also can’t tell you how or what exactly you can expect because there are no two experiences that are the same. It is a living thing that guides you on a journey – one only you can take.

The Iron Council is what you need it to be, even if you don’t know what that is yet.

There is no single IC experience that I can share with you – only 300+ journeys supported by other good men learning how to be better.

Is the Iron Council right for you? I have no idea. Only you do. It isn’t easy. It isn’t always fun. It isn’t something you do when you have some spare time to sit at the computer. It is an invitation to evaluate and change your very DNA and it can be as scary as it is rewarding, but you and I both know that building something great is rarely easy or always fun.

The question isn’t if the Iron Council is right for you, but rather are you ready for it?

Your journey lies ahead. We hope to see you on the path. 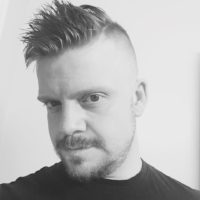 Joshua Laycock is a successful business man, a writer, a father, a husband and a member of the Iron Council.

He feels very strongly that with improved communication, compassion, discipline and personal accountability the world could be made a much better place and that it is our duty as men to constantly improve the condition of our lives and the lives of the people we care for.