The Internet is a wonderful thing. It allows us access to so much information and knowledge. It even allows us some access to wisdom – which is radically different than just knowledge. I am a huge consumer of Internet and social media content. It’s part of my job to be as up to date with what is hitting my clients so that I can help them decipher and deal with what is coming at them via mobile phones and tablets. One of the things that is coming across to me more and more are the articles, videos and memes that allude to being “fast” or getting somewhere quickly.

In business, I understand the idea of being the first person to a space. I also understand that too many people are obsessed with being perfect rather than being fast. I’ve described so many of the advisors I coach as “getting ready to get ready”. This simply means that the advisor is spending too much time doing things that do not produce revenue. They use the excuse of wanting to know as much as possible before they act. They use this as a shield to keep them doing the things that are comfortable rather than doing the things that need to be done. This is a recipe for disaster in a fast moving business world. But moving fast in business is different than moving fast in building wealth.

On social media, “entrepreneurism” is the most recent fad. Everyone wants to be an entrepreneur. It’s just what’s “in” at the moment. Because of that, there is so much content being put out there about how easy it is to grow wealth quickly. Pictures of a laptop overlooking a beach as cash rolls in lures people into thinking that anyone can build a business successfully and quickly. That’s bad enough but I’m starting to see it creep in to the wealth building mindset as well.

The Day Trader is Back with a Vengeance

When I began in this business back in 1998, everyone wanted to day trade. I had a hard time conversing with people, because they were all on aol dialing in and trying to make quick cash on the side. It seemed to work until it didn’t! By 2002 most people had had enough. They found the grim reality that nothing happens easily or quickly. It takes TIME to build wealth. Yet, here we are again in 2016 and the rise of the day trader is here again! People think that as long as you have a phone and an idea you can create a video, put it out there and just cash in. Or maybe they can use the phone to flip stocks and options as Brexit votes or countries like China shut their markets down for a day.

Wealth isn’t built in a flash

“Slow is smooth and smooth is fast” is what you learn when you learn to draw and shoot a pistol. It is important to be fast when firing a weapon for obvious reasons. But the definition of fast is not what you may think it is. Without any training, most people will try and jerk the gun because they want to move the gun quickly to move it on target. But a jerking motion will rarely produce a good result. In fact it will often magnify your miss. The same is true doing anything underwater. Imagine trying to be “fast” underwater (ever try to clap your hands underwater?). The harder you move your hands, the more you slow down. You can’t be “fast” underwater like you can be “fast” on land. In operating a gun or when doing something underwater, you need to, instead, move smoothly. By moving smooth you minimize jerky motions and you achieve your task with more accuracy…which is the definition of fast, at least as it pertains to gun fighting!

In building wealth, you must apply the same principles you apply underwater or in gun fighting. You can’t “jerk” your movements. You must move slow and deliberately. I am not necessarily referring to the time it takes you to make decisions. Most successful clients of mine actually make decisions pretty quickly. I am more focused on the time it takes to achieve success. It won’t be fast. But it should be smooth. Compounding your wealth takes time. A penny doubled every day is only worth about $300 after 15 days….by then most give up. But if you stay at it, the compounding effect grows to over $10,000,000 by 31 days. You read that right. A penny doubled every day is worth over $10 million after 31 days. But most quit before they ever get there because they are looking for quick hits.

I feel compelled to put this disclaimer here: in real life money doesn’t double every day. It usually takes 20, 30, 40 YEARS of good and consistent decisions to get you to where you want to go.

1) Find someone in your community who is expert in the world of both behavior and finance. You will know this person as evidenced by several traits, a few of which are professional financial designations, a willingness to share their own balance sheet with you and also what appears to be a squared away physical world. The physical part is critical because it isn’t often that someone who can’t make good behavioral choices in health and nutrition will be able to help you make good behavioral choices in your finances (this is controversial I know…but behavior is the number one reason for success or failure in finance).

2) Engage that person either through the digital world or face-to-face. Ask questions and seek help by pushing aside your ego and be willing to learn from someone who has helped people under “live fire” in the world of building personal balance sheets.

3) Be wary of hearing advice that is common. You should ask your advisor “why haven’t I heard this before” at least once (if not several times). The idea here isn’t that you want someone who has crazy ideas…the idea is you want someone who sees the world differently than most. Think about it, Americans have followed the same advice for about 40 years now and the results in the world of personal finance have been underwhelming to say the least.

4) Act. Make a decision. Don’t “get ready to get ready”. But also understand that your results will take time.

Do the things above. Do the first one right now. Move slow and move smooth and you will actually be moving fast! 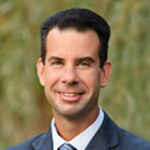 For almost 20 years my calling has been to help clients with one of the highest stakes games in their lives: the building and maintaining of their family’s finances. I focus on behavior and decision-making when helping my clients. In addition to my role as a Certified Financial Planner™, I am a husband, father of four, an endurance athlete, and a professional speaker and coach to financial advisors.