I had the opportunity to visit with Representative Madison Cawthorn with my family in DC last week and, let me tell you, it did not disappoint. We got a chance to tour the Capitol Building and get a small glimpse inside the world of politics and DC. But we also had the chance to sit down in his office and throw down the podcast you’re about to listen to.

We talk about the world of politics, why, while politics is fast-paced, very little seems to get accomplished on the Hill, how we as men can be informed without immersing ourselves in the political arena and theater that comes with it, the world of outrage, and, at the end of the day, what we as men need to do to keep this country on track.

“The general population of America, we agree on just about everything.” Tweet That— Madison Cawthorn 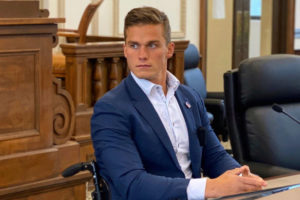 My guest today North Carolina Representative Madison Cawthorn. He was gracious enough to invite my family and me to his office in DC and show us around the Hill. He is currently the youngest member of the House of Representatives and, since our last conversation, we have become good friends.

He’s also someone I’ve got my eye on for a long and successful career in politics (even though he believes in term limits and talks about that with me in this podcast). And, I believe he can do some incredible things in leading the nation to a more free and prosperous time. He’s got a lot of energy, a lot of enthusiasm, and real desire to keep this nation great. Enjoy our conversation.

“I check myself from…justifying immorality by having guys around me who believe stronger than I do.” Tweet That— Madison Cawthorn

“People don’t like talking about politics because it requires a lot of critical thinking.” Tweet That— Madison Cawthorn

There are two things every man needs to thrive in life: frameworks and networks.

Believe it or not, that’s it. Frameworks (systems, processes, and tools) for success and networks of powerful people to help keep him on track.

And, not coincidentally, we offer both inside our exclusive brotherhood, the Iron Council. The Iron Council has been designed to maximize both and give you frameworks and networks that can be difficult to identify and come by on your own.

And, when you band with us, you’ll immediately unlock access to the tools and men who have been working together for nearly 6 years to improve themselves in every facet of their lives.

Band with us now at www.orderofman.com/ironcouncil.

Innoculate Yourself Against Employer Mandates
Next Post: DO’s and DO NOT’s of Separation and Divorce