Home » Blog » LEADERSHIP » The Art of Pitching, Performing, and Presenting

Whether you’re pitching your latest idea to a group of investors, vying for a job promotion, or performing in front of a large crowd, learning to become a better public speaker is a skill all men should learn.

My guest today, Michael Port, shares why every man needs to learn this skills now, how to deliver a killer presentation, and the most common mistakes you’ll need to avoid in order to get people on your side.

“The quality of your life is determined by how you well you perform in high-stakes situations.” Tweet That— Michael Port 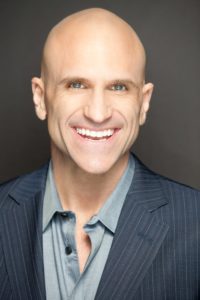 Michael Port has written six books, including Book Yourself Solid and Steal the Show, the latter which—according to the former President of Starbucks—“might be the most unique and practical book ever written on the topic of public speaking.”

He’s been called an “uncommonly honest author” by the Boston Globe, a “marketing guru” by The Wall Street Journal, a “sales guru” by the Financial Times, “a public speaking phenom” by Jonathan Fields and “the best public speaking coach in the world” by Lewis Howes. The founder of MastermindTalks, Jayson Gaignard, declared, “Michael Port is the best speaker I’ve ever seen.”

His books have been on the bestseller lists of the NY Times, Wall Street Journal, USA Today and Publisher’s Weekly and have been selected by Amazon and 800-CEO-READ as “best books of the year.”

He was once a professional actor, having received his MFA from NYU’s Graduate Acting Program, guest starring on shows like Sex & The City and Law & Order, and in films like The Pelican Brief and Down to Earth. These days, Michael can be seen on MSNBC, CNBC, and PBS as an on air expert in communication and business development and as the host of the most popular podcast on public speaking and performance, Steal the Show with Michael Port.

“Good performance is about authentic behavior in manufactured environments.” Tweet That— Michael Port

“Our ability to handle responsibility is what influences our level of success.” Tweet That— Michael Port

3 questions for presenting a new idea

“People that are compelling take risks. People that play it safe, not so compelling.” Tweet That— Michael Port

“Commitment making a fulfilling is what demonstrates who we are and builds our reputation.” Tweet That— Michael Port

Live a Life of Success, Happiness, and Fulfillment
Next Post: Creating Freedom with Entrepreneurship with Ryan Moran