There is no doubt in my mind that, more and more, individualism and personal liberty, are frowned upon. It’s as if somehow individuality is a threat to the system as a whole. That couldn’t be further from the truth.

The truth is that men who express their own individuality and personal liberty and responsibility are the men responsible for building their families, innovating new ideas in technology, medicine, and every area of life, and stepping up in their neighborhoods and communities.

Today, I have the honor of sharing with you my conversation with the one and only Ted Nugent. We talk about the dangers of political correctness, how to improve your life and happiness through discipline, the deterioration of excellence, and the importance of freedom, liberty, and rugged individualism. 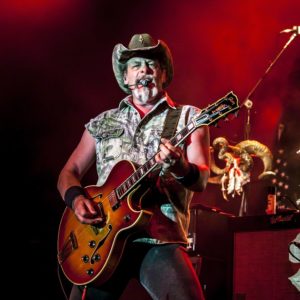 Guys, I am so excited to introduce to you a man that needs no introduction, The Detroit Madman, Uncle Ted, The Motor City Madman, The Nuge, Mr. Ted Nugent.

He has been rocking for more than 50 years and, based on this interview, you’ll hear he has no plans of settling down anytime soon.

In addition to that, he has become a huge advocate for personal liberty and individual responsibility.

He currently sits on the Board of Directors for the NRA and he is gearing up for his Rockin’ America Again Tour later this year.

But, today he’s here to talk about a topic he is all-too-familiar with; freedom, liberty, and rugged individualism.

“It’s really simple – you’re either in the asset column or the liability column.” Tweet That— Ted Nugent

“Clean and sober is the only way you can be an asset to yourself, your family, and your fellow man.” Tweet That— Ted Nugent

“I saw the deterioration of the absolute demand of excellence.” Tweet That— Ted Nugent

“You’ve got to kick ass or you’re going to get your ass kicked.” Tweet That— Ted Nugent

“If you’re not pissing off the idiots, you’re an idiot.” Tweet That— Ted Nugent

“I am convinced beyond a shadow of a doubt, I am exactly what the founding fathers wanted.” Tweet That— Ted Nugent

Guys, just a quick break to tell you about our exclusive brotherhood, The Iron Council.

If you’re looking to take your life to the next level, this is something you are going to be interested in. The 280 members of The Iron Council are paying off debt, connecting with their wives for the first time in years, connecting with their kids, starting new businesses, securing promotions, losing weight and just about anything else they’re setting out to do.

It’s not easy. It’s not a magic pill. These guys are doing the work required. I make no promises as to your results – that’s on you – but, I can tell you that you’ll get the tools, the guidance, the direction, the brotherhood, and the accountability you need to do big things in your life, as are the brothers inside the Council.

If you’re ready to get going and reserve your seat at the table, you can do so at www.orderofman.com/ironcouncil.

“Discipline is the foundation for happiness.” Tweet That— Ted Nugent

“It has served me well to pay attention.” Tweet That— Ted Nugent

Feel the Fear
Next Post: How Bad Do You Want It?