Home » Blog » INTELLECT » Lead Yourself Before Leading Others | LEIF BABIN

Most men are infatuated with leading others in some capacity. I get it, I believe the capacity and desire to lead is hardwired into our DNA. That said, too many men want to lead others without effectively leading themselves.

Today, I am joined by former Navy SEAL and New York Times Bestselling Author, Leif Babin, to talk about recognizing excuses you craft for yourself, why brutally honest assessments are crucial, how to build “Leadership Capital” with others, and how to best lead yourself before leading others.

“Every one of the points we talk about [in Extreme Ownership] can be taken too far in one direction.” Tweet That— Leif Babin 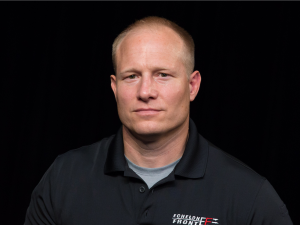 My guest today is a man that likely needs no introduction, Leif Babin.

Leif is a former Navy SEAL and platoon commander for Task Unit Bruiser. He is the recipient of the Silver Star, two Bronze Stars, and the Purple Heart.

After retiring from the Navy after 13 years, he went on to co-found Echelon Front with Jocko Willink and became a Multi-New York Times Bestselling Author with his books, Extreme Ownership and, more recently, The Dichotomy of Leadership. He now serves as the President and Cheif Operating Officer for Echelon Front as they work to serve businesses around the globe and teach them how to more effectively lead from the front.

“You have to balance between the multiple forces that are pulling you in different directions.” Tweet That— Leif Babin

“When the team wins, you win.” Tweet That— Leif Babin

The Dichotomy of Leadership

Gentlemen, let me tell you about one of the best investments you could make as we roll into the new year.

It’s called the Iron Council and once you become a brother, you will unlock access to 450+ men from all over the world who have tapped into the tools, systems, challenges, and accountability to take their lives to the next level.

I say it’s an investment because what you put in will be returned to you if you’re willing to use the tools I and others inside have created. Frankly, some men aren’t. They believe that if they invest a few bucks that their wildest dreams will come true.

Of course, that’s not the case, and those who get the most out of their experience in the Iron Council are those who put in the most effort towards creating their own results. We simply light the path and show you the way. The rest is on you.

If you’re ready to put in the work and surround yourself with other men who are doing the same, join us. Head to www.orderofman.com/ironcouncil to lock in your seat!

“If someone is pushing back on things or being argumentative, you need to look at yourself first and ask, ‘What am I doing to provoke that kind of behavior?'” Tweet That— Leif Babin